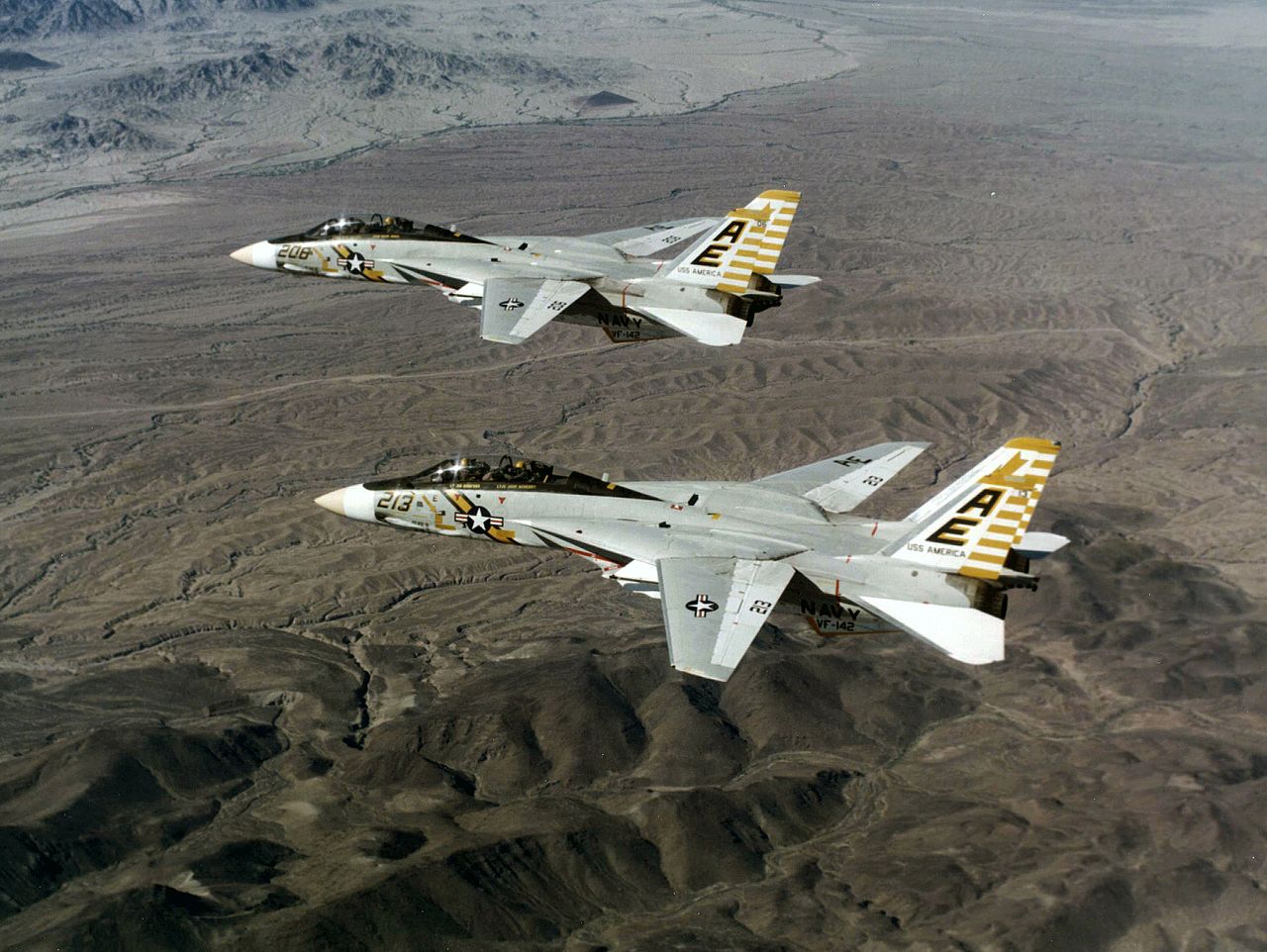 Included:
- Livery of VF-142's first CAG F-14 Tomcat, Bureau Number 159446
- Custom AIM-7F Livery, in a bright white with golden-yellow & black stripes, intended to imitate a more time accurate AIM-7E4
- Custom AIM-54A Livery, intended to imitate a more period accurate AIM-54A Phoenix
- Custom helmets which are as close to VF-142's helmets during 1975-76, design fitted onto the HGU-33 as we do not have an APH-6(major thanks to Shmoo42 for his clean and polished base layers for the HGU-33)
- Modified Roughmets to more closely represent the glossy finish, anti-glare stripe in front of the canopy, and various reflective Aluminum Corogard surfaces(thanks to Shmoo42 for helping make it not look like bare reflective polygons)
- Modified Normals of the vertical stabilizers, to more accurately represent the leading edges' shape(thanks again to Shmoo42 for vastly improving on my initial attempts)

Check out VF-143 Pukin' Dogs, it has received an update with the onset of re-remastering VF-142 Ghostriders:
https://www.digitalcombatsimulator.com/en/files/3325226/

NOTE(s):
- The package will not display correctly without the CAG aircraft, as the rest of the liveries pull from the CAG to reduce file size.
- The CAG jet is in a .rar file due to added textures resulting in the .zip format bloating to an excess of 300 MB, which prohibits the upload. Though simply extracting it to the CoreMods F-14A liveries folder is acceptable, I recommend compressing it in .zip on one's own machine to reduce the amount of space this livery will take up uncompressed.
- Due to some confusion, it must be addressed that the .zip liveries can only be(as far as I'm aware of as of right now), in the CoreMods folders, not the Saved Games folders. Please drop the package of .zips within CoreMods/aircraft/F14/Liveries/F-14A-135-GR instead of a Saved Games liveries folder.
- I am dearly sorry, but apparently a 299 MB .rar was registered as a 300.55 MB .rar when uploading to User Files. So I unfortunately have to provide a slightly downgraded version of the intended product. Terribly sorry for this.

I have made a Ko-Fi page! If anyone would like to donate so I can acquire more information and photos to deliver greater accuracy to my Tomcats, link provided just below.
https://ko-fi.com/yaesakura_dcs

If anything issues are found, such as texture misalignments or color differences, please do let me know. Feedback is accepted, let me know in the comments or via DM through Discord at "八重樱#0151"
Tags: F-14A, F-14A Tomcat, 1970s, VF-142, Ghostriders
FOLLOW US