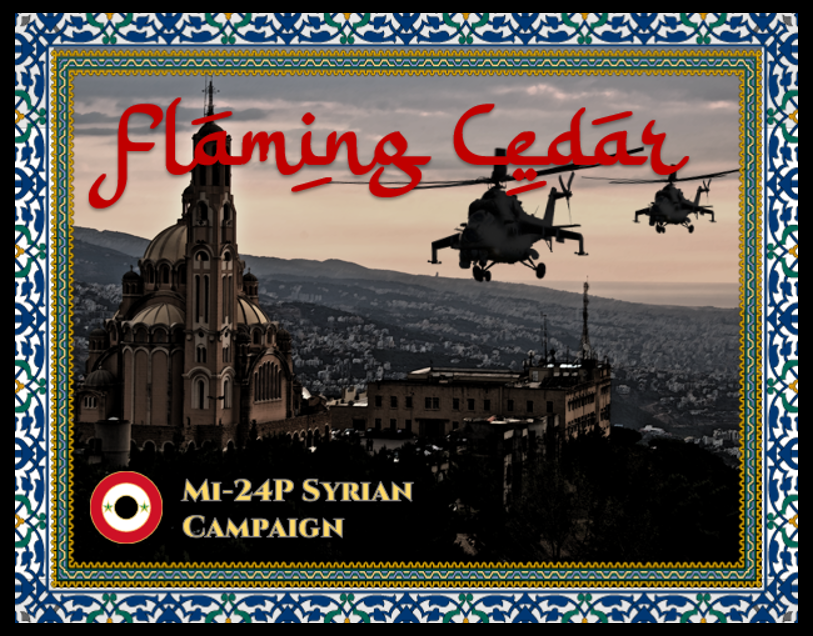 Typ - Mehrspielermission
Autor - YogSothoth
Mi-24 mission pack. The missions are a prelude to the deployment of Syrian Mi-24 in the Lebanon War and a platform to train your skills in immersive settings.

The missions have 3 or 4 Hind slots per sub-mission (3-4 pilots + 3-4 gunners). It's possible to split players between 2 different sub-missions or simply spawn in a sandbox slot. (Choose the helicopter slot according to the mission you wish to do, or play sandbox style)

Flaming Cedar : Prelude is the first chapter of a Lebanon war campaign, flying under the Syrian flag. You will play as pilots who were recruited for the new SYAAF Mi-24 program. This mission pack contains 3 missions that are meant to be played in sequence, as a campaign. The missions are designed to practice the Mi-24 through different sub-missions of basic flight, T/O and landing, formation flying, weapons and combat simulation training.

Read the briefings and all should go well! ;)

Once we get Embarking/disembarking feature working for the Hind, I will update it.

Please leave a comment if you encounter issues or have suggestions.
Next Chapter with actual combat missions will be published in the future.