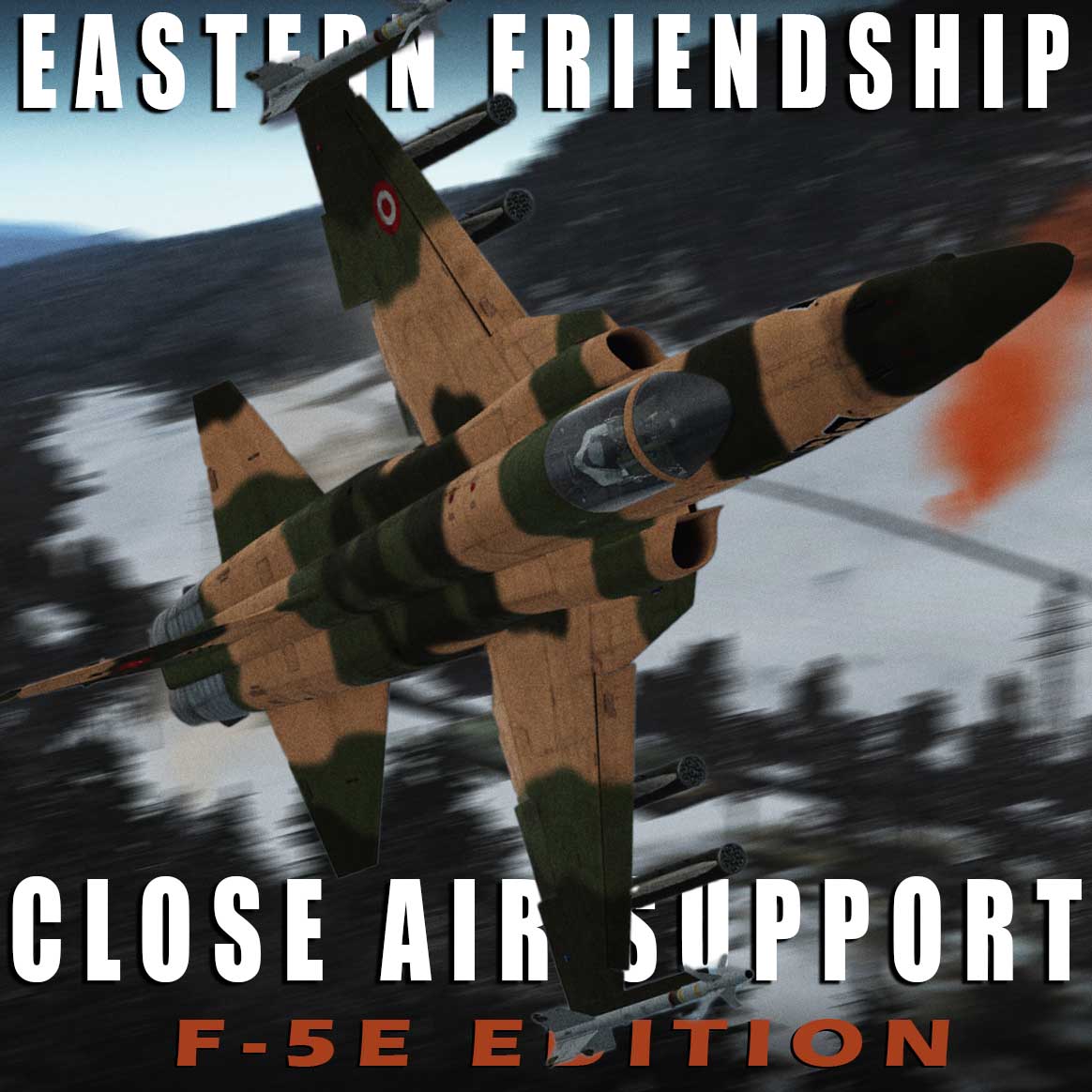 Last night, a Georgian weapons depot was attacked by Russian back South Ossetia separatist forces, and a number of weapons systems were stolen, including APCs, radar guided AA vehicles and munitions.  Intelligence suggests these purloined assets will be moved East back into South Ossetia.

You are the lead pilot of Colt 5 flight of 2 F-5Es based at Kutaisi Airbase in northern Georgia.  Colt 5 is sitting alert ready to support NATO and Georgian ground forces.

The situation in northern Georgia, South Ossetia and Abkhazia is deteriorating by the hour.  Insurgent attacks against Georgian military, police and political targets have increased dramatically in the last 48 hours, even as NATO air and ground forces are deploying to the theatre.

The weather is not great, a low overcast of 10000ft will keep close air support right in the heart of the AAA and MANPAD envelope.  We have already lost 2 NATO aircraft to hostile fire, so make sure to employ liberal use of flares when flying in proximity to hostile forces.

Check in with MAGIC after departure and follow all instructions. (this is a trigger based mission, so it’s important that you do what you’ve been instructed to do until you are instructed to do something else).

Some aircraft in this strike package are not capable of HAVE QUICK, so all comms will be in the clear.  Use code words / brevity when and where appropriate.

Colt 51 will stand 5 minute alert at Kutaisi.  If scrambled, depart runway 26 and expect to be cleared to WP.2 and to contact MAGIC.  Follow instructions given by MAGIC.  (It’s important to navigate towards the waypoints / fixes that you’ve been cleared to, until directed to do otherwise by ATC or MAGIC).
Ensure that Chaff/Flares are set, make sure the bombs are set up correctly.  AAA/MANPAD threats can be anticipated anywhere in the theatre of operations.

The Russians have clandestinely re-enforced rebel ground forces in and around Abkhazia, South Ossettia.  Air Defences include ZSU-23 emplacements throughout Northern Georgia, as well as mobile ZSU-23 Shilkas and SA-8 Gecko IR mobile SAMs. These may in fact be manned by active duty Russian Armed Forces and/or GRU/FSB personnel, along with special Russian “volunteers”.
There is now an active SA-6 site operating at Gudauta airfield, built by the Russians and manned by Russian “volunteers”, mostly either ex-military or rich playboy types who are looking for adventure.
MANPADs are expected anywhere in the AO, including on the Georgian side of the border.

The Russian Air Force has currently been operating an almost 24 hour a day CAP just north of the border.  Do not cross the Georgian/Russian border at any time!
NATO fighters are cleared to fire on any hostile aircraft within Georgian airspace that is either,
•    Declared hostile by MAGIC
•    Has fired on NATO aircraft or Ground Forces

Weather in the target area is forecast to be generally VFR, clear skies but visibility dropping down to 4-6 miles in light mist or fog.  Winds are going to be light out of the west.

The Jetstream is far north and will not be a factor.  Contrail altitude is forecast to be at 17,000msl.

There are a few instances in the mission where you will need to use the Radio Menu / F10 other menu to make a choice.
You CAN use the standard radio menu items to:

Besides the examples above, you will not need to use the radio menu to contact ATC or other mission elements.  These will happen at certain times or when you pass certain waypoints.  Make sure you have the correct frequencies active in your radios, and you use the correct radio transmit button!

2.  This functionality of this mission's triggers and actions are
dependent on you NOT CHANGING THE WEAPONS LOADOUT!  Doing so may break your mission, and that sucks!

3.  DO NOT STRAY INTO RUSSIAN OR SOUTH OSSETIAN TERRITORY!

4.  If you do make it back to base, keep in mind that you are in a combat zone and are expected to fly the overhead break to land.  This way you keep your speed up as much as possible in case you are shot at.  Plus it looks f'n cool!

6.  If you enjoy the mission, please let me know under the user comments here, or via the ED Forums! My forum profile is https://forums.eagle.ru/profile/61874-sedlo/ and my email is simulatorsedlo@gmail.com.   If you would like to make a donation to the cause, please contact me above!