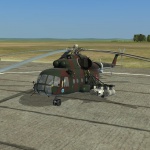 We are abandoning Beslan airfield, and regrouping at Mozdok airfield. Enemy forces are near. So Beslan airfield is not secure.
An Mi8 as crashed southwest of Beslan, with some paratroops on board. The pilots are dead. You must fly to rescue them before enemy forces find them.
A small group of enemy armed cars are already on their way to the crash site. You must hurry.
We believe that enemy forces will kill civilians near the crash site, because they helped our comrades. So engage and destroy enemy forces in the area.