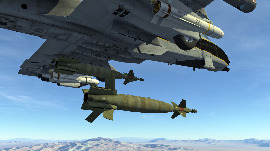 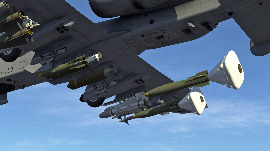 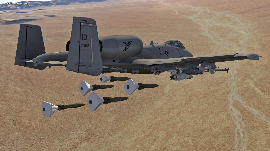 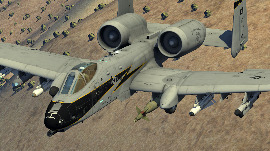 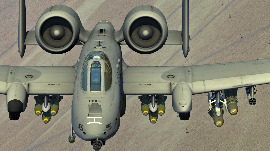 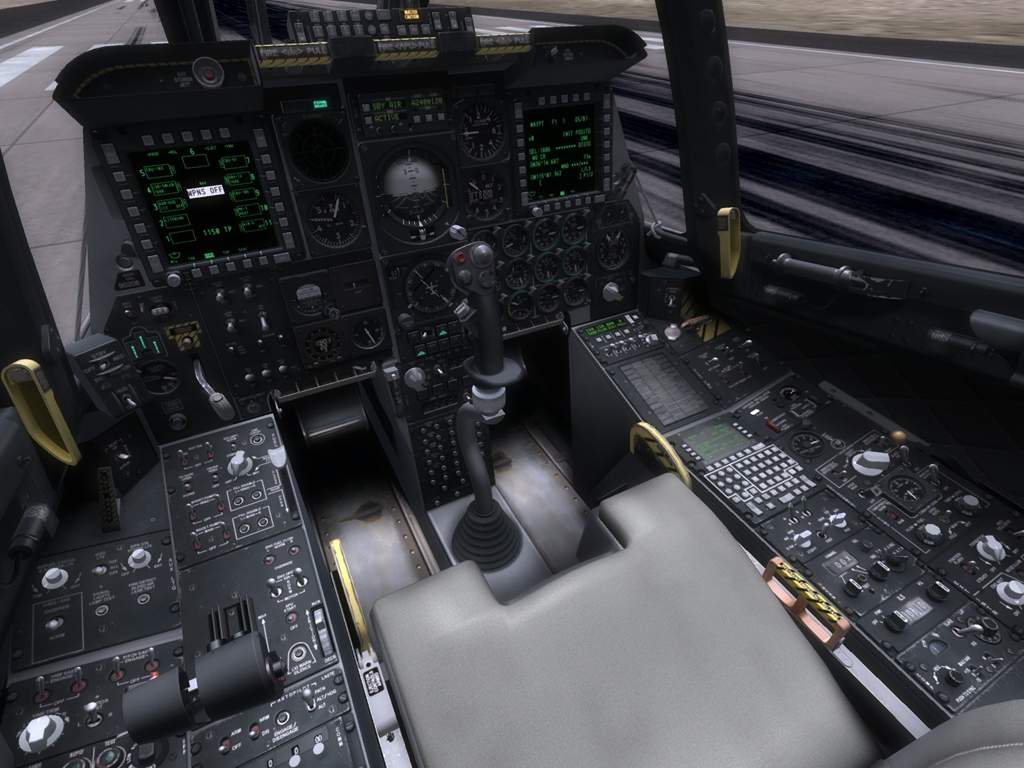 The A-10C is an enhanced version of the famous A-10A that served as a major close air support aircraft for the U.S. Air Force, Air National Guard, and Reserves for almost 30 years. A-10C has been upgraded to meet 21 st century standards, using systems such as Multi-Function Color Displays (MFCD), GPS-guided weapons, and data-link support. Retaining all the features of older A-10A, the A-10C has turned into a true precision strike fighter with the most modern navigation systems, precision attack weapons (Maverick, JDAM, WCMD, and laser-guided bombs), and an integrated countermeasures system.

The A-10C has participated in operations over Iraq and Afghanistan and proved to be a precise and effective weapon in the "War on Terrorism". Its advanced equipment has greatly reduced the number of "friendly fire" incidents - thanks largely to the Situational Awareness Datalink (SADL) and the ability to better identify targets with using the Litening II AT targeting pod.

The A-10C of course retains its ability to do what it was originally designed to do: kill tanks in a conventional force-on-force battlefield.

Despite the fact that many of the computer and weapon systems are new in the A-10C, most of the remaining systems are retained from the A-10A. Engines, fuel, electrical, hydraulic and emergency systems, communications, and lighting do not differ from those in the latest versions of A-10A/A-10A+. As with previous versions, the A-10C - very easy to fly and is a stable and survivable weapons platform. For those familiar with DCS: Black Shark, we feel that the A-10C will be much easier to fly. 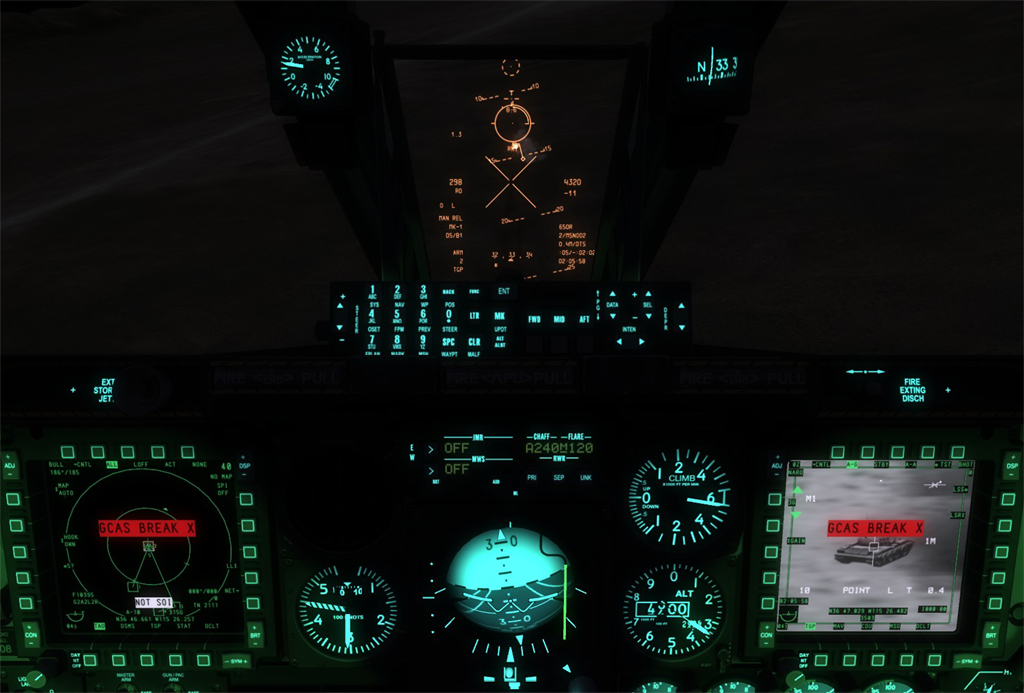 The DCS A-10C cockpit is a 100% six-degrees of freedom (6 DOF) cockpit that allows complete freedom of movement around the cockpit. Each panel is reproduced in exacting detail to match operational A-10Cs (Suite 3.1). This includes all panels, switches, dials, buttons being animated, rendered in the 3D, and with high-resolution textures. Both day, night, and Night Vision Goggle (NVG) lighting is available. 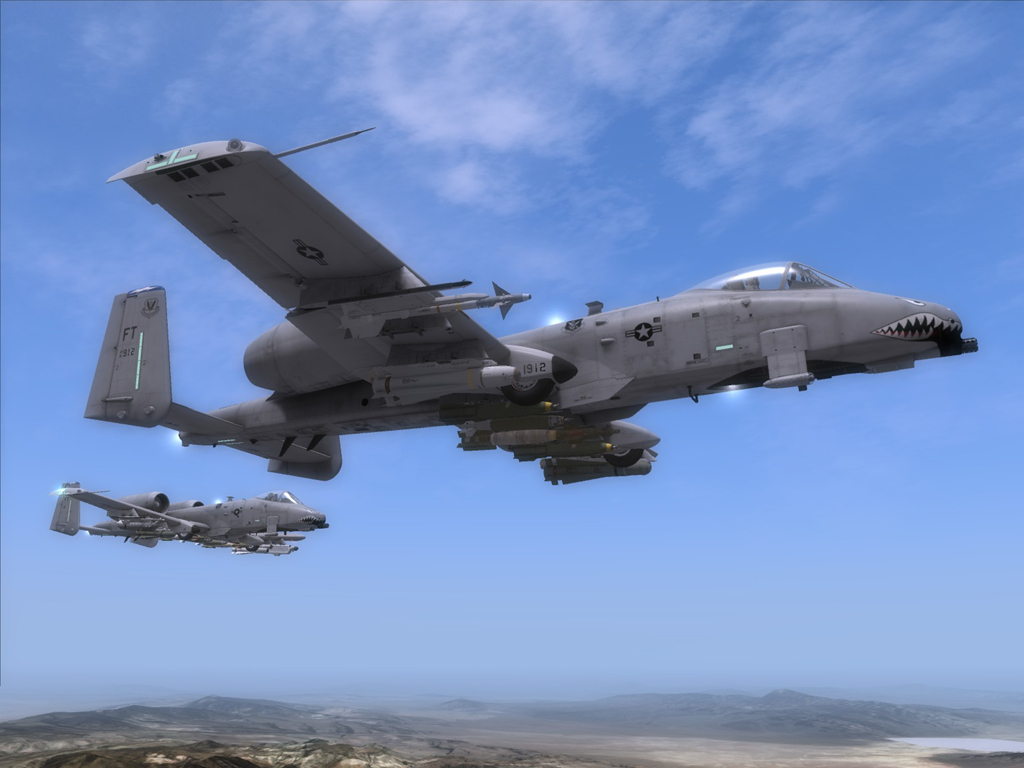 As with the cockpit, the 3D model of the A-10C is highly detailed with complete animation of control surfaces, multiple-texture maps, normal and specular maps, and 100,000 polygon construction.

The A-10C model has an integrated, highly-detailed damage model that can range from a few bullet holes to entire sections of the aircraft being blown off.

The front dash of the A-10C sports two MFCDs that can display data from various aircraft sub-systems (DTS, TAD, DSMS, TGP, MSG, STAT, and video from Maverick missiles). They allow a much more rapid and intuitive way to convey to the pilot the necessary information and input data. Each MFCD is 5x5 inches (12.7h 12.7w cm) and has 5 buttons on each of the 4 sides. The functions of these Option Select Buttons (OSB) depend on the context of the selected MFCD page. 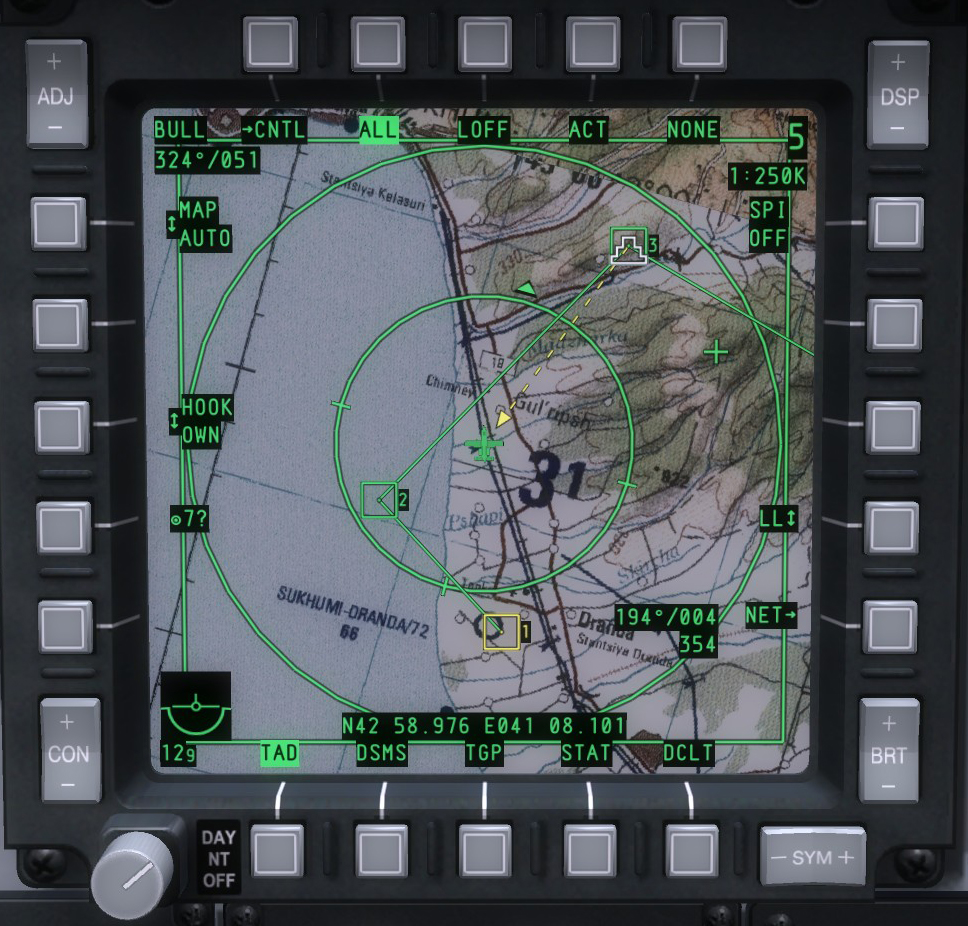 The TAD displays a top view of the current tactical situation using symbols that represent your current position (Ownship), mission anchor point (Bullseye), Sensor Point of Interest (SPI), waypoints, flight route, and datalink symbols of friendly air and ground units. The TAD may be set as the Sensor Of Interest (SOI) that allows the TAD to be interacted with including using the slew control on the HOTAS throttle to slew the TAD cursor. Other functions are also controlled by the HOTAS. Using the TAD cursor, you can designate (hook) symbols on the TAD and set them as your SPI and get additional information about them.

All of this data can be overlaid on real air navigation charts of various types depending on the TAD display scale (ONC, TPC, JOG, etc.). Map will be available for both the Black Sea and Nevada theaters.

When receiving a digital 9-line briefing from a Joint Terminal Attack Controller, the assigned target is marked on the TAD for easy target locating. 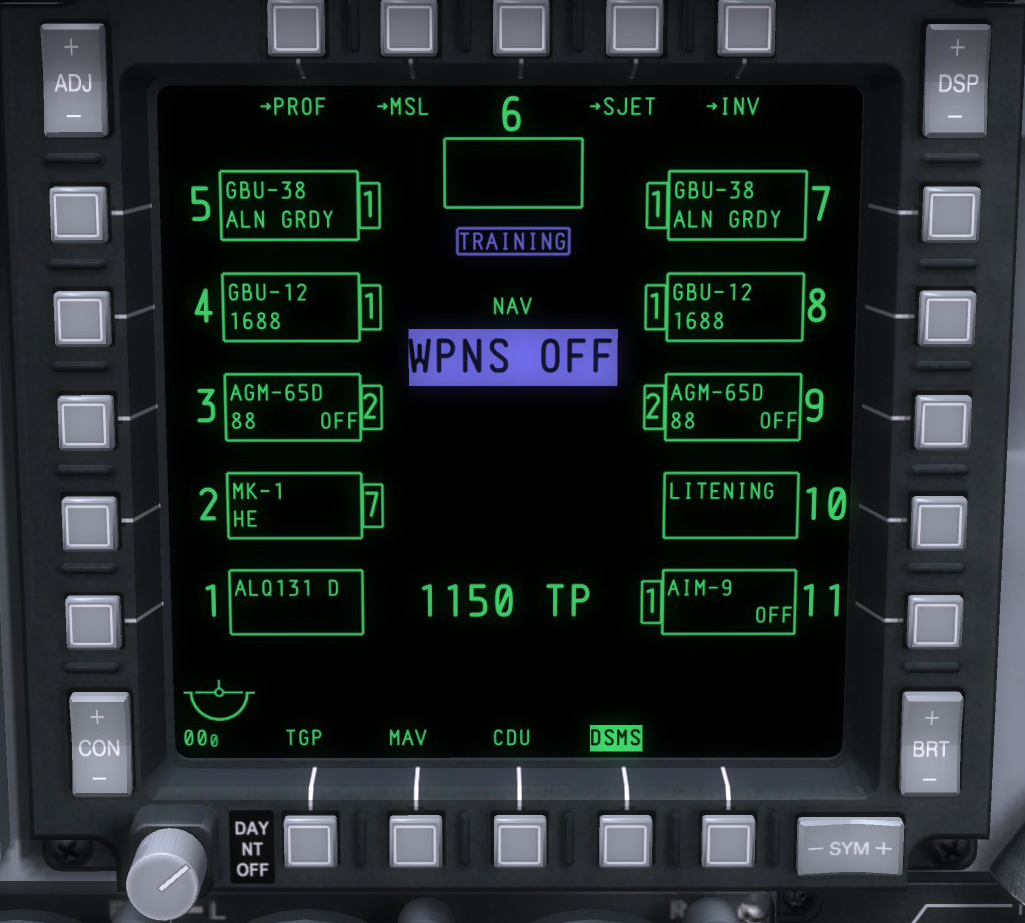 The DSMS provides the pilot an overview of how the aircraft is loaded with stores, gun ammunition remaining, weapon status, the selected weapon profile, and release setting (SAFE, ARMED, TRAIN).

The DSMS also contains a sub-page that gives the pilot the ability to browse profiles, sel ect and edit profiles and parameters for the use of weapons, set fuzing for each weapon profile, and set the interval and the number of weapons in ripple release. Each of the combinations of these parameters is called a profile. These profiles can be selected either fr om the DSMS, the Up Front Control (UFC), or using the HOTAS.

The DSMS provides the ability to selectively reset the loading on any pylon or rail when in TRAIN mode.