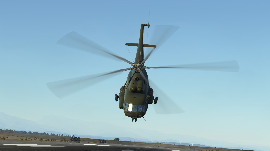 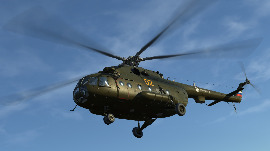 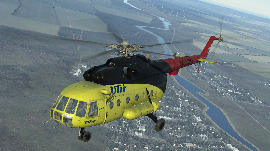 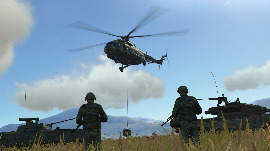 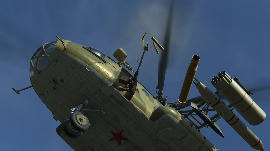 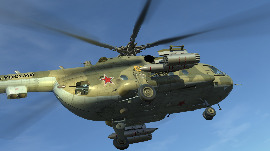 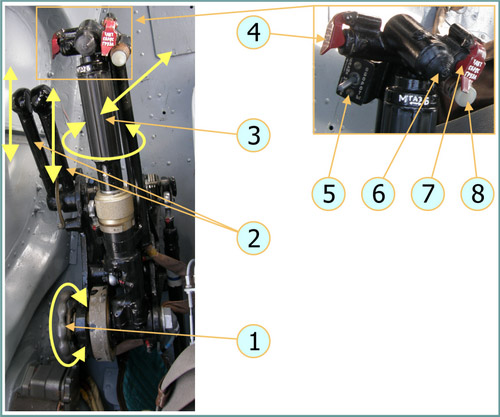 The collective stick is mounted on the cockpit floor to the left of the pilot's seat. The stick includes the twist-grip throttle control with friction adjustment, covered control buttons for external cargo emergency jettison and normal release, a spring-loaded N2 trim INCR/DECR switch, a searchlight control button, and a CLUTCH RELEASE button. A hydraulic clutch holds the stick securely in any position, allowing the pilot to make smooth pitch adjustments and preventing the stick from creeping. Ordinarily, the clutch is adjusted manually using the handwheel to allow the stick to be moved, without releasing the clutch, with a force of 20-25 kg. The CLUTCH RELEASE button activates the hydraulic clutch release system, allowing the stick to be moved with a force no greater than 1.5 kg. When the button is released, the clutch re-engages. The CLUTCH RELEASE button also disengages the autopilot altitude channel. The engine condition levers (ECLs) are mounted on the left side of the collective bracket.

The directional control system is operated by the pilot or copilot pedal assemblies. From the pedals to the directional servo, the control linkage consists of a system of push/pull rods and bellcranks. Cables are used to pass control inputs to the tail rotor gearbox. The pitch change mechanism for the gearbox consists of a chain, sprocket, and worm gear, which extends or retracts the pitch control rod. Rod movement is transmitted via the pitch change links to the blade grips, resulting in a change of blade angle. Pushing the left pedal forward causes the pitch control rod to retract. The blade pitch angle decreases and the helicopter turns to the left. Pushing the right pedal forward extends the pitch control rod, increasing the blade pitch angle, and the helicopter turns to the right. Right pedal movement is limited by СПУУ-52-1 (SPUU-52-1) moveable stop (pitch limiter) system which uses air density and temperature to adjust the maximum tail rotor pitch angle and prevent overloading of the tail rotor and drive system.

The pilot's pedals are mounted on a bracket on the cockpit floor in front of the seat. Pedal adjusters are provided to adjust the pedal distance for individual comfort. Microswitches are mounted in each sub-pedal assembly to allow the pilot to introduce directional control inputs while the autopilot yaw channel is engaged.

Force centering devices are incorporated in the cyclic and directional control systems. These devices are installed in the control linkages routed along the left forward bulkhead in the cargo cabin. The devices furnish a force gradient or "feel" to the cyclic sticks and pedals. The farther the control element is deflected, the more force is applied. A TRIM DISENGAGE button is located on the pilot and copilot cyclic stick grips. Pressing and holding the TRIM DISENGAGE button will immediately reduce the forces on stick and pedals to zero. Releasing the button reengages the trim.

The autopilot system is designed to stabilize control of the helicopter while taxiing, during takeoff, while hovering, in flight, and during landing. Under normal operating conditions, the yaw, pitch, and roll channels are engaged before beginning to taxi and remain engaged throughout the flight and landing. The altitude channel is engaged as needed to maintain the selected barometric altitude. The autopilot system includes an integrated control panel for the yaw, roll, pitch, and barometric altitude channels; a trim indicator unit; an amplifier/control unit; pitch and roll compensation transducers; and yaw, pitch, and roll rate gyros. The control panel and trim indicator unit are located on the center console. The hydraulic flight control servos apply autopilot corrections to the flight control surfaces and provide feedback signals to the autopilot channels. Autopilot roll, pitch, and altitude correction signals are limited to a maximum of 20% of control travel for flight safety in the event of false signals or system failure. The pilot may intervene at any time while the autopilot is engaged to make manual corrections by operating the flight controls. The autopilot channels are engaged by pressing the green ON buttons at the top of the control panel on the Center Console. The roll and pitch channels are designed to work together continuously, while the yaw and altitude channels can operate independently. The yaw and altitude channels can be disengaged individually using the red OFF buttons on the control panel. Each channel has a trim indicator which shows the relative displacement of the flight control servo spindle. The control panel has centering knobs for the yaw, pitch, and roll channels which allow the pilot to introduce small corrections (±10°) by turning the knob for the channel requiring correction.

The Mi-8MTV2 helicopter power plant consists of two TV3-117VM turboshaft engines. The engines are installed on the fuselage deck in a common nacelle. They are situated parallel to helicopter's longitudinal centerline at a distance of 600 mm from each other and are tilted downward, toward the front, at an angle of 4°30' relative to the fuselage horizontal reference line. The rear output shafts of the engines are connected, via a uniball coupling, to the main transmission, which transmits power to the main rotor, AC generators, tail rotor, and accessories. 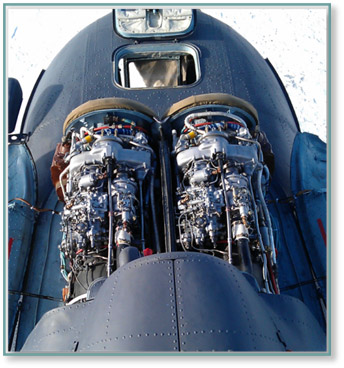 The engines have an integrated regulating system which provides main rotor speed control and synchronizes the power output of both engines. They have both automatic and manual throttle control systems. Either engine may be operated independently to allow for flight or emergency takeoff with one engine inoperative. The engines are equipped with individual air inlet particle separators and anti-ice systems.

The air inlet particle separator system protects the engine inlet during taxiing, takeoff, and landing at unimproved airstrips and in sand/dust areas. In addition the system provides electrical and bleed air anti-ice heating.

The system mounts on the front of the engine, in place of the nose cone assembly. Each engine has an independent particle separator system. The system begins to operate when bleed air is supplied to the ejector by opening the flow control valve. The valve is controlled by the DUST PROT LEFT and DUST PROT RIGHT switches located on the Pilot-Navigator's Right Side Console. When the system is running, suction pulls contaminated air into the inlet duct passages (1). Centrifugal forces throw the dust particles toward the aft dome surface (2) where they are driven by the air flow through the separator baffles (4). The main portion of the air, with the dust removed, passes through the duct to the engine air inlet (3). The contaminated air (dust concentrate) is pulled into the dust ejector duct (5) and discharged overboard (6). 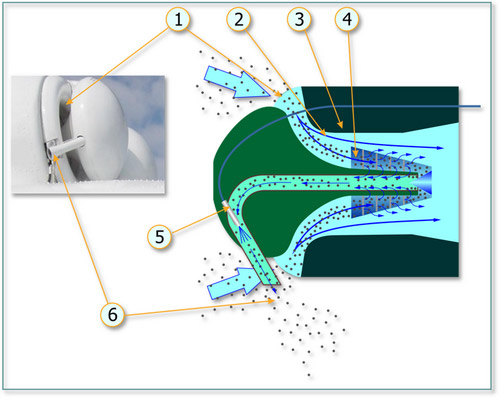