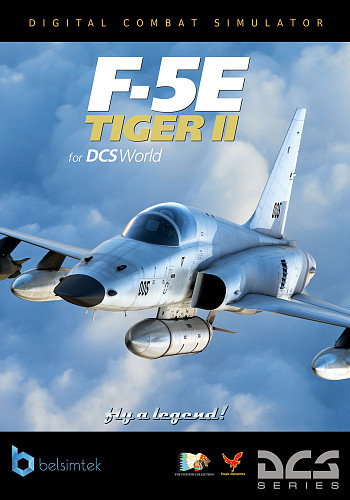 Belsimtek with The Fighter Collection and Eagle Dynamics are happy to announce that DCS: F-5E Tiger II is available for pre-purchase from the DCS shop. The pre-purchase provides both a 20% discount off the retail price and access to the Early Access coming in July-August 2016.

The F-5E has trapeziform wings, two turbojet engines equipped with afterburners, and tricycle landing gear. Pitch, roll, and yaw control systems are hydraulically actuated in order to relieve control stick and rudder pedals forces. Artificial feel system is built in pitch and roll control systems to simulate aerodynamic loads for the pilot. For example: after the landing gear is retracted, left and right movement of the control stick is limited by a spring mechanism to prevent excessive roll rates.

A pressurized cockpit and air conditioning system ensures pilot safety at all altitudes up to the service ceiling. The pilot is also provided with an oxygen mask and anti-g suit. The cockpit is fitted with a Martin Baker SIII S-3 ejection seat, two UHF radios, automatic direction finder, radio navigation system, and a standard set of navigation lights. Landing-taxi lights are located on the underside of each engine inlet duct are extended together with the landing gear. The cockpit canopy provides a superb in-flight view appropriate for air-to-air operations.

Five hard points (one centerline pylon and four underwing pylons) allow the aircraft to carry different types of air-to-ground weapons (bombs, cluster munitions, and rockets) 6,400 pounds (about 3000 kg) in total. In addition, illumination ammunition and cargo containers can be attached. To increase flight duration and range, external fuel tanks can be attached to three hard points (a centerline pylon and two inboard pylons). Maneuverability and speed can be maximized in combat by jettisoning all external stores.