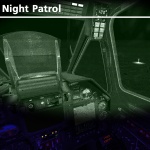 In an effort to gain control over the increasing tempo of insurgent operations, the Ministry of Interior has recently established a curfew in the conflict region. All non-essential (non-emergency) civilian traffic is prohibited between 2200 and 0530 hours.

The Ministry of Interior has been coordinating with the Ministry of Defense to establish ground and airborne night patrols in the region. To facilitate operations, army aviation has established a command center in Maykop AFB, where the most seasoned helicopter crews will be stationed and tasked with flying the night patrols.
Loading comments...
FOLLOW US