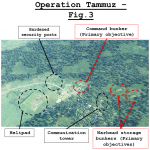 
Intl' has revealed an Abkhazian top-secret nuclear weapons program.
- The nuclear warheads are being manufactured in an isolated base in the Sukhumi region.
- The facility contains a productuion plant located in a hardened bunker at the end of a long access road
- Weapon components and warheads are stored in two hardened storage bunkers in a forest about half a mile East of the production plant.
** Objective **
Destroy Abkhazian nuclear capabilities.

** Mission **
1. Destroy the production plant.
2. Destroy the two hardened storage bunkers.
3. Destroy any unit attempting to escape the site (Either by air or on the ground)

* Flight "Pony" (A-10C, x4):
- T/O Senaki-Kolkhi
- Proceed to WP3 ("Observation") and gather final attack data (position of air-defenses, presence of any helicopter/s awaiting on the helipad etc')
- Attack and destroy the 3 objective bunkers
- Maintain constant observation on the objective area and access road, and eliminate any units attempting to leave the site.

* IMPORTANT *
Enemy alert state is currently low due to poor weather.
Recommended attack profiles is to enter enemy airspace at very low altitude (~100 ft) ASL to delay detection by local SA-6 battery. This battery is responsible for alerting the base and other supporting defenses.