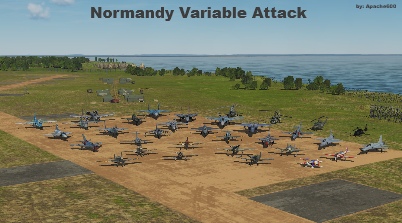 This is an all-in-one style Air-Ground, Air-Air attack mission for the Normandy map, and supports every flyable platform in DCS.  All Fixed wing aircraft start at either Saint Pierre du Mont, Deux Jumeaux, or Cricqueville-en-Bessin.  While all the helicopters start at Cricqueville-en-Bessin.  There is also a fleet sailing North - South, starting just north of the Land Based spawning airfields.  The Kuznestov has 3 Su-33’s, the Stennis has 4 F-18’s, the Tarawa has 4 AV-8B’s, and the Carl Vinson has 2 slots for “Mod of Interest” (Defaulted to F-18’s).

Air Mission Difficulty definitions:  (These missions are mainly built for 1-2 players, except for the "Large Cap Group's" air missions.  Those are more suited for larger groups of player's flying together.)
Easy - Either a few non-retaliatory aircraft, or a single fighter or two with guns only. (Vietnam and Modern enemies may have IR missiles)
Medium - One or more retaliatory aircraft.  Short range missiles possible.
Hard - Multiple retaliatory aircraft with possibility of both short and long range missiles.
For “Large CAP Group’s” all difficulties have A-A missiles.

Only Mi-8's and Huey's are listed as "Medevac" and are the only ones that can do rescue mission pickups.

In order to activate a mission, you MUST select it through the F10 radio menu option.

Once completed with a mission, you will have the option of selecting a new mission.   If you selected a mission that you no longer wish to complete, or have selected a mission in error, you can use the "Auto-complete" radio option to delete the units and go back to the main menu.    ** NOTE - if you select the "auto-complete" option, you can no longer select that mission in the future. **

All Helo Missions require at least one helicopter that can pick up troops.  That would only be the Mi-8, or the UH-1 at this time.

AWAC's is available at 263Mhz (Chan 11 for aircraft that need it, Chan G for Viggen)  AWAC is set to Immortal and Invisible.

Tanker aircraft (Texaco) is operated on a respawnable script.  It is also set to Invisible.  If the tanker runs out of fuel, a new one will spawn.
Tanker aircraft is available at 257Mhz (Chan 12 for aircraft that need it)