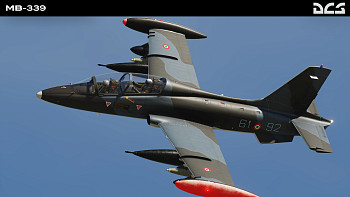 The MB-339 is an Italian, single engine, twin seat, jet trainer and light attack aircraft that was derived from the Cold War MB-326. The aircraft entered service in the early 1980s and quickly became the primary trainer of the Italian Air Force.


The MB-339 was exported and many are still in service. Flown by the Armada de la República Argentina (Argentine Navy), this aircraft took part in the Falklands-Malvinas war. It was also used by the Eritrean Air Force against rebels, smugglers, and the Ethiopian Air Force.

Historic operators of the A version of the MB-339 were the Air Forces of Italy, Malaysia, Nigeria, Peru, United Arab Emirates, Argentina and Ghana. Thanks to its superb flying qualities, the MB-339’s PAN aerobatic version is also used by two national aerobatic teams: The “Frecce Tricolori” (Italian Air Force) and the “Al Fursan” (“The Knights” – UAE Air Force). The MB-339 is the only jet aircraft capable of performing the famous Lomcovák maneuver.

The MB-339 will be released in an almost feature-complete state. Some of the most interesting features available at release include:

A highly advanced Flight Model based on performance and engineering data from the real aircraft. Furthermore, the flight model has been deeply tested by former MB-339 Frecce Tricolori pilots.

Extensive and detailed simulation of all flight systems:

A highly accurate 3D model that is based on blueprints and surveys of the real MB-339. The model includes a complete set of animations, lighting and a detailed damage model.

A very accurate 6-DOF (Degrees of Freedom) cockpit with realistic and detailed instruments, controls, and textures. The cockpit is VR-ready.

Included with the purchase of the MB-339 is an array of country liveries. Several training and practice missions, single player missions, and instant action missions are included. Also available at launch is a mini campaign and an exhaustive PDF user manual. We look forward to your feedback!