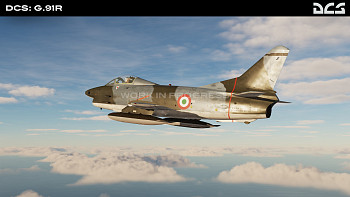 The G.91 is an Italian jet fighter of the Cold War era that was designed and optimized for strike and reconnaissance missions. The G.91 originated from the 1953 NATO NBMR-1 competition that sought a "LightWeight Strike Fighter" to be adopted as standard equipment across the air forces of the various member nations.

The G.91 was declared the winner of the competition in 1958, and it entered operational service with the Italian Air Force in 1961 and West German Luftwaffe service the following year. It was also evaluated by the U.S. Air Force, and it was adopted by the Portuguese Air Force. It saw extensive service during the Portuguese Colonial War in Angola and Mozambique.