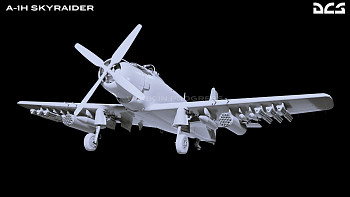 We are delighted to introduce a new third party developer, Crosstail Studios, who are developing the DCS: A-1H Skyraider. The ‘Spad’ excelled in the US Navy, Marine Corps, and Air Force due to its immense payload and ability to loiter over the battlefield for extended periods. It also served with the British and French Air Forces. Take a look at this Flying Legend now.

The A-1H Skyraider is a single engine, low wing, fighter bomber that served most of its time during the Korean and Vietnam wars. Known for its ability to carry heavy ordnance loads, the Skyraider is powered by a Wright R-3350 Duplex-Cyclone supercharged radial engine; the same engine that powered the B-29 Superfortress heavy bomber.

DCS: A-1H Skyraider will aim to be the most accurate representation of this aircraft for any flight simulator. Crosstail Studios has a partnership with the Cavanaugh Flight Museum, from which they have been given access to all aircraft, which includes two airworthy Skyraiders.

The Crosstail Studios team has spent an enormous amount of time recreating the A-1H Skyraider based on 3D scans from the aircraft located at the Cavanaugh Flight Museum. Subject matter experts have guided the flight model characteristics and other key details. Crosstail also has the support of the A-1 Skyraider Association veteran’s community to aid in the development of this magnificent aircraft.


The Skyraider was primarily used to support combat search and rescue, and it helped save countless lives during the Korean and Vietnam wars. In a world quickly evolving into jet- turbine powered aircraft, the Skyraider still managed to have a long and successful service. In fact, the A-10 Warthog was designed with some of the characteristics of the Skyraider, including heavy ordnance load capabilities and long endurance.

Crosstail Studios is also proud to announce their partnership with Echo One Niner Audio Production who will produce the A-1H Skyraider audio! The Echo 19 team has extensive resources and a passion for recreating true-to-life audio experiences. With their help, the A-1H will come out of the box sounding fantastic.

The Crosstail Studios team has put together a brief teaser video, demonstrating the potential behind their new incoming full fidelity module for DCS. Check it out!