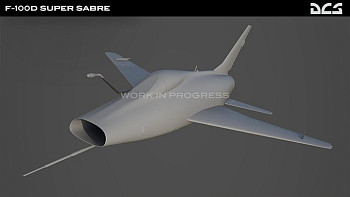 The F-100D is an advanced version of the Super Sabre that features improved avionics, landing flaps, and larger wings and tail fin. The upgraded avionics include the AN/AJB-1B low-altitude bombing system and an AN/APR-25 radar homing and warning system.

The Super Sabre fighter bomber flew extensively over Vietnam as the United States Air Force's primary close air support jet. The F-100 was in service for 17 years and flew over 360,000 combat sorties before it was retired in 1971.

DCS: F-100D Super Sabre aspires to be the most faithful re-creation of the Hun ever produced for flight simulation. Working with veteran Hun pilots, the Grinnelli team is dedicated to simulating the avionics systems, weapons, performance, and unique flight model in high fidelity.