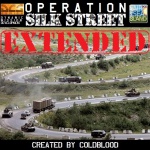 Russian Extremist Forces from North Ossetia exited the Roki Tunnel last night and began the occupation of South Ossetia. Their walk on the capital Tskhinvali was prepared by a group of insurgents who have established control over the inner city. Once they gain complete control over the city area and build fortifications they will be not only a threat for the region but even for the NATO missile defense shield. We do not exactly know about their artillery capabilities and what to come.
We need the people back on our side so that the Georgian army can move through the city safely to face the Russians and push them out of South Ossetia. Therefor we have to avoid bloodsheed among the cilvilians at all cost.

The current Operation-Status will be displayed repeatedly during the operation.

UH-1H:
---------------------------------------------------
Once freed, we intend to operate the FARP in Tskhinvali under the callsign Paris (127.500 MHz AM).
Transport the cargo loads from the soccer field at FOB Gori to the 'T' on the FARP next to the hospital of Tskhinvali. Assist to establish it as FARP Paris and make it operational.
Once established arm the helicopter and assist the Georgian 1st Tank Battalion from Gori on their way into the mountains. Give close support and push the Russians back to the Roki Tunnel.

A-10C:
---------------------------------------------------
Provide close air support  for the Georgian 1st Tank Battalion to drive the Russians out of South Ossetia and secure the tunnel entrance. Better stay close to the ground and in the canyons approaching the mountains. Be aware to respect the Russian international border; all of South Russia ist controlled from Vladikavkaz. Moscow is just waiting for a chance to demonstrate their perceived air supremacy.
Contact ABFAC Uzi 11 @ 31.000 MHz FM to get battlefield reconnaissance fom the surrounding of the support helicopters.

Help to establish and secure our desired FOB at Tskhinvali Hospital and FARP Paris by lifting up reinforcement troops from FOB Gori (green smoke) and transport them to FARP Paris. This will accelerate the initial operation compared to the time these units need when moving with the Georgian 1st Tank Battalion.
Next distribute propaganda leaflets over the city. Pick them up at Tskhinvali University LZ Alfa (orange smoke) and fly over the city area.
Contribute to push the Russians back to the Roki Tunnel.

FURTHER TASKS AND MISSION OBJECTIVES WILL BE COMMUNICATED DURING THE OPERATION!