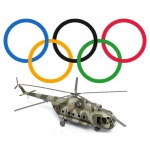 Type - Single mission
Author - markuswohlgenannt
A so-far unidentified group has taken control of a high-rise building in downtown Sochi that houses olympic athletes. Negotiations with the group have failed. The decision has been made to send in a team of 10 Russian special forces to free the hostages. The Russian forces will be airlifted in by helicopter and inserted by fast-roping onto the roof of the building.

Local operative will identify building for you.

Crew chief will call out instructions to pilot to achieve a stable hover at the correct height over the building roof.

Once in a stable hover, 10 troops will fast-rope onto the building roof.

Pick up troops once they have secured the building.

It is important that the insertion is done quickly, otherwise the hostage takers may have enough time to defend against this operation.
Tags: SP mission, Mi-8
FOLLOW US