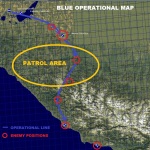 In the last few week NATO managed to force Russian troops towards east. By doing so KRYMSK, KRASONDAR, GELENDHZIK has fallen in NATO hands serving as bases for operations

As a result the oposing armies are just a "stone throw away" from each other. This makes the crews task harder during operations.