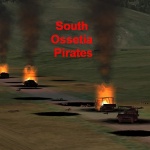 A group of heavily armed and well organized insurgents have been seizing civilian transport convoys on the highway east of Oni, Georgia, bordering the region of South Ossetia.  They have been targeting Russian commercial trucking and have either destroyed the trucks or captured them leaving dozens of casualties in their wake.

Today, these ruthless highway pirates attacked and partially destroyed a Russian military convoy that was sent to the area to investigate the malicious acts of against the civilian transport trucks.  Many vehicles were taken and there were 25 soldiers killed with many more wounded in the IED ambush attack..

These acts must stop now and those reponsible must pay!

Local civilians believe that the insugents have established a camp within striking distance of the highway.

We have established a FARP, code named Kalitka, at Verkh Balkariya in a valley 43 km south of Nal`Chik airfield.
FOLLOW US