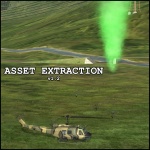 Type - Multiplayer mission
Uploaded by - psyrixx
Situation:
For several years now the Russians have had an asset, code name "Rabid Bear", deep undercover in the Insurgent ranks.
Recently he has obtained documents and cartography that pinpoint several high value insurgent targets. Late last night the
asset escaped the insurgent controlled city of Coban and made his way East of the city to a bridge and is using it as cover
while he waits for extraction.

This morning, satellite photos showed a significant increase in enemy activity. They must have realized what happened.
Several groups of enemy units are set up as search parties no doubt trying to find, and most likely eliminate, Rabid Bear
before we can extract him from the area. Success of this mission will give us the intelligence we need to put a huge dent in
regional terrorism and therefore this is a joint allied forces mission.

Mission Briefing:
Two UH-60 Blackhawk helicopters (Pontiac) are standing by to depart Beslan at 0830 and make their way towards the bridge
east of Coban. They will take up a hover position just outside the valley and wait for an all-clear signal from friendly aircraft
before proceeding in for extraction.

If UH-1H (Chevy) pilots wish to take their place, we’ll ground the Blackhawks and let you boys extract the asset instead.
Chevy has a different flight plan than the Blackhawks, so pay attention to your section of this briefing.

Non-extraction aircraft are to ensure valley entrances are clear of enemy AAA, SAM and other units prior to clearing rescue
teams in to extract the asset. Aircraft are advised to return to Beslan for refueling and rearming prior to clearing helicopters
in for extraction. Stick to your flight plan: it has been designed to maximize chances for mission success.

* UH-1H (Chevy) *
Take off from Beslan and fly east following the railway until you hit the river that runs through Chermen then follow it south
until it forks at Tarskoye. Follow the right fork then turn west when you hit the mountains and continue towards Terk. Hold
short at Terk until you've been given the all clear to enter the valley and extract the asset by friendly forces, then egress
north following the river near the asset. Maintain a Northern heading when you reach the city of Gizel and you'll return to
Beslan - hopefully with the asset unharmed. Consider arming your birds in case anything unexpected pops up en route.

* SU-25T (Springfield) *
Equip your aircraft for SEAD (Suppression of Enemy Air Defenses) and eliminate any radar SAM emplacements to the north
of the mountains then continue along your waypoints to line up on approach into the extraction zone. Destroy any enemy
anti-air presence at the valley entrances as well as around Coban.

* Ka-50 (Uzi) *
Follow your waypoints to fly an approach to the eastern entrance of the extraction zone then move in and engage enemy
units in and around the valley entrances to make sure we have cleared the way for Pontiac. Maintain visual contact on the
rescue helicopters during the extraction and provide them with close air support while they are verifying the asset’s identity.

* A-10C (Hawg, Pig) / A-10A (Boar) *
We have received reports of insurgent tank columns protected by Shilka AAA vehicles operating in the area. You are to fly
CAS and make sure any enemy armor in the area is eliminated. Maintain a close watch on the areas around the extraction
zone during the asset pick-up and keep our guys safe.

* F-15C (Dodge) / Su-27 (Klondike) *
* Su-33 (October) / MiG-29 (Talon) *
It is highly likely the insurgents will scramble several enemy fighters to engage our rescue aircraft. Your mission is to
maintain air superiority north of the Georgian border and engage any enemy fighters that threaten our extraction mission.
Be careful not to stray south into Georgia… enemy patrols in Georgian airspace are currently very heavy.

* P-51D (Ford) *
As retired Russian air force pilots and current P-51D enthusiasts we thank you for offering your personal planes and skills
to this mission. Several supply trucks have been reported by locals heading towards Coban from the city of Arhonskaya,
located just to the Southwest of Beslan airport. Your mission is to locate and destroy this convoy before it can deliver
additional troops or supplies to the insurgents in Coban. After the supply convoy has been neutralized, you are free to engage
targets of opportunity in and around Coban. Proceed with caution as your older aircraft will not hold up well to modern anti-air
weapons.
Tags: DCS, World, A-10A, A-10C, F-15C, Ka-50, P-51D, MiG-29, Su-25T, Su-27, Su-33, Escort, CAP, CAS, SEAD, Rescue
FOLLOW US