The Last Battle of Normandy 1944 : FALAISE 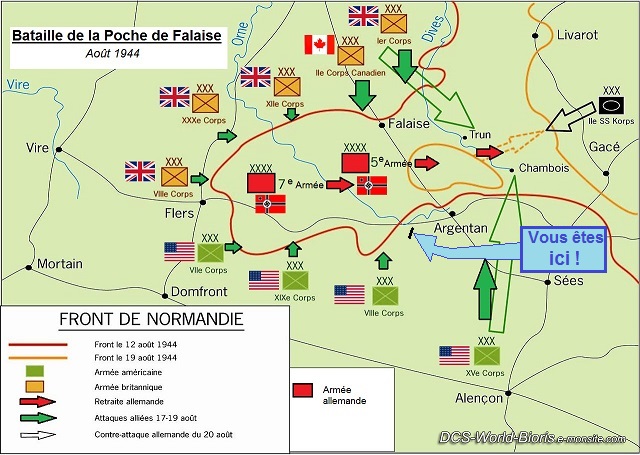 The Last Battle of Normandy 1944 : FALAISE

Type - Single mission
Uploaded by - Bioris
- Relive the last battle of Normandy in 1944 aboard one of the allied planes - English Version Mission - With WWII Assets Pack.
- Almost all the planes of WWII can be used.

- You are a pilot in the 88th Squadron of the 2nd TAF - Tactical Air Force of the RAF, composed of planes of different types flown by several nations USA, England, France, ...).
- The last of the best German troops of the 5th and 7th Armies give their last stand near the town of Falaise.
- This is the very last battle in Normandy.

- The Germans are surrounded by the Canadians, the British, the Americans, and a French division.

- The only passage to escape is the East, but the Canadians (II Canadian Corps) will quickly close this passage from the North by fighting fiercely. The English, in the North, and the Americans, in the South then arrive to finalize this pincer movement.

- Objective n°1:
=========
- Stop the advance of German troops towards the east of the town of Falaise. Watch the progress of ground troops, they are initially based a little south and south-west of Falaise.

- Objective 2:
=========
- You will help the allies defeat the 1st and 2nd SS Panzer Division. These 2 Armored Divisions are the most violent of the Wehrmacht.