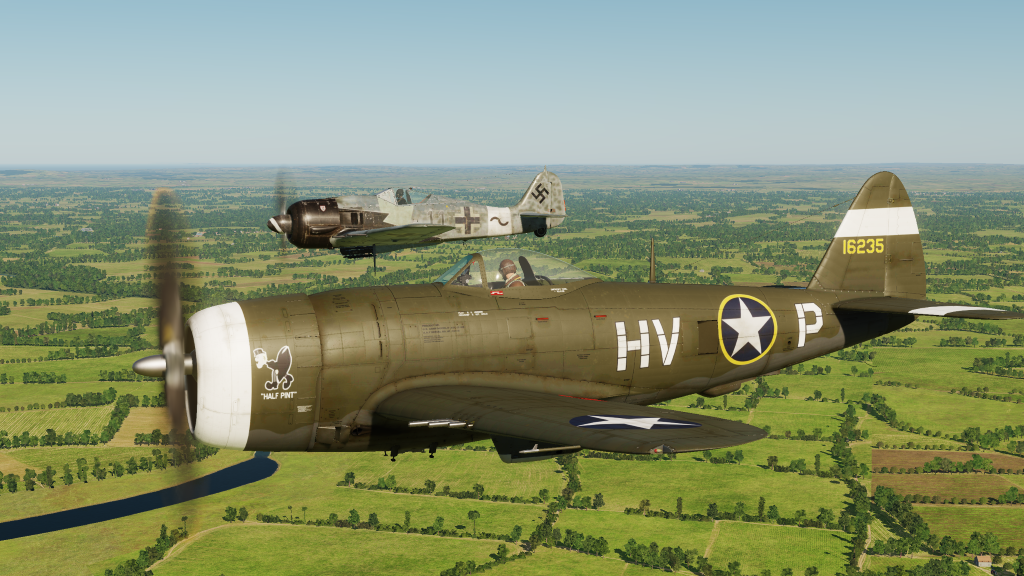 Lt Robert Johnson was assigned to 61FS, 56FG, 8 Air Force USAAF, on April, 1943. This is is Bob Johnson's third aircraft."Lucky" was used to score his third, fourth, fifth and sixth victories before being lost in the North Sea on 22nd March 1944 with Dale Stream at the controls. Johnson had previously flow two C-Models Thunderbolts christened Half Pint and All Hell, and had shot down his first two kills in the late aircraft, C-5 41-6235/HV-P. Some weeks prior to "Lucky's" watery demise, Johnson had discarded the aircraft in favor of P-47D-15 42-76234/HV-P, which he logically chistened "Double Lucky". This aircraft duly lived up to its nickname, as the ace is assumed to have scored all his remaining kills (bar his last two) in it, although the serial number(s) of the aircraft used for this string of victories (coded HV-P) has not been 100 per cent confirmed. Finally, now Capt Johnson flew P-47D-21 42-255/LM-Q Penrod & Sam to achieve his final two kills - number 26 ans 27.

Near-fatal engagement flyin "Half Pint"
One of the 56th's worst setbacks occurred on June 26, 1943, when 48 P-47Cs left a forward operating base at RAF Manston late in the afternoon to provide escort for B-17 bombers returning from a mission against Villacoublay airfield in the Paris suburbs. As the P-47s approached the rendezvous point near Forges-les-Eaux, they were jumped from above and behind by 16 Focke-Wulf Fw 190s of II Gruppe, JG 26. The first pass scattered the Thunderbolts, and Johnson's aircraft, flying at the rear of the 61st Squadron's formation, was seriously damaged by an Fw 190 fighter which fired 21 20 mm cannon shells into his fuselage which ruptured his hydraulic system. Burned and partially blinded by hydraulic fluid, Johnson tried to bail out, but his parachute snagged, and the canopy was damaged and would only open about 6 inches.

After pulling out of an uncontrolled spin and with the fire amazingly going out on its own, Johnson headed for the English Channel, but was intercepted by a single Fw 190. Unable to fight back, he maneuvered while under a series of attacks, and although sustaining further heavy damage from hundreds of 7.92 mm rounds, managed to survive until the German ran out of ammunition. The German rocked his wings to salute Johnson, then turned back. His opponent was likely the commander of III/JG 2, Major Egon Mayer.[2] [N 1] This story is, unfortunately, not supported by any hard evidence and must be taken as such. After landing, Johnson tried to count the bullet holes in his airplane, but gave up after the tally passed 200 – without even moving around the aircraft.

While Johnson made it back to land at Manston, four other pilots of the 56th FG were killed in action. A fifth pilot, Samuel D. Hamilton, able to extend only one of his plane's landing gear struts, had to bail out over the English Channel and was rescued north of Yarmouth. 56 FG suffered two more P-47 damaged beyond repair, one Johnsons, and at least 5 more severely damaged against 9 Jagdwaffe confirmed claims. Johnson suffered shrapnel wounds and minor burns to his face, hands, and legs, and was awarded the Purple Heart. He resumed flying missions on July 1.

Stenciling: Factory standard. Note; this aircraft was waxed and polished by crew chief for additional speed advantage. The stenciled code HV is tilted slightly down on the port side. New type stencil with crew names in white lettering and red emergency canopy release plus second canopy release in White on canopy rail. Up to 25 Balkenkreuz and acft type victory tallies now on side fuselage under cockpit.

2nd Option
Extract the Robert Johnson Half Pint folder to your C:\Users\"YourUserNameHere"\Saved Games\DCS.openbeta\Liveries\P-47D-30 folder
If you don't have that folder, you may create it.