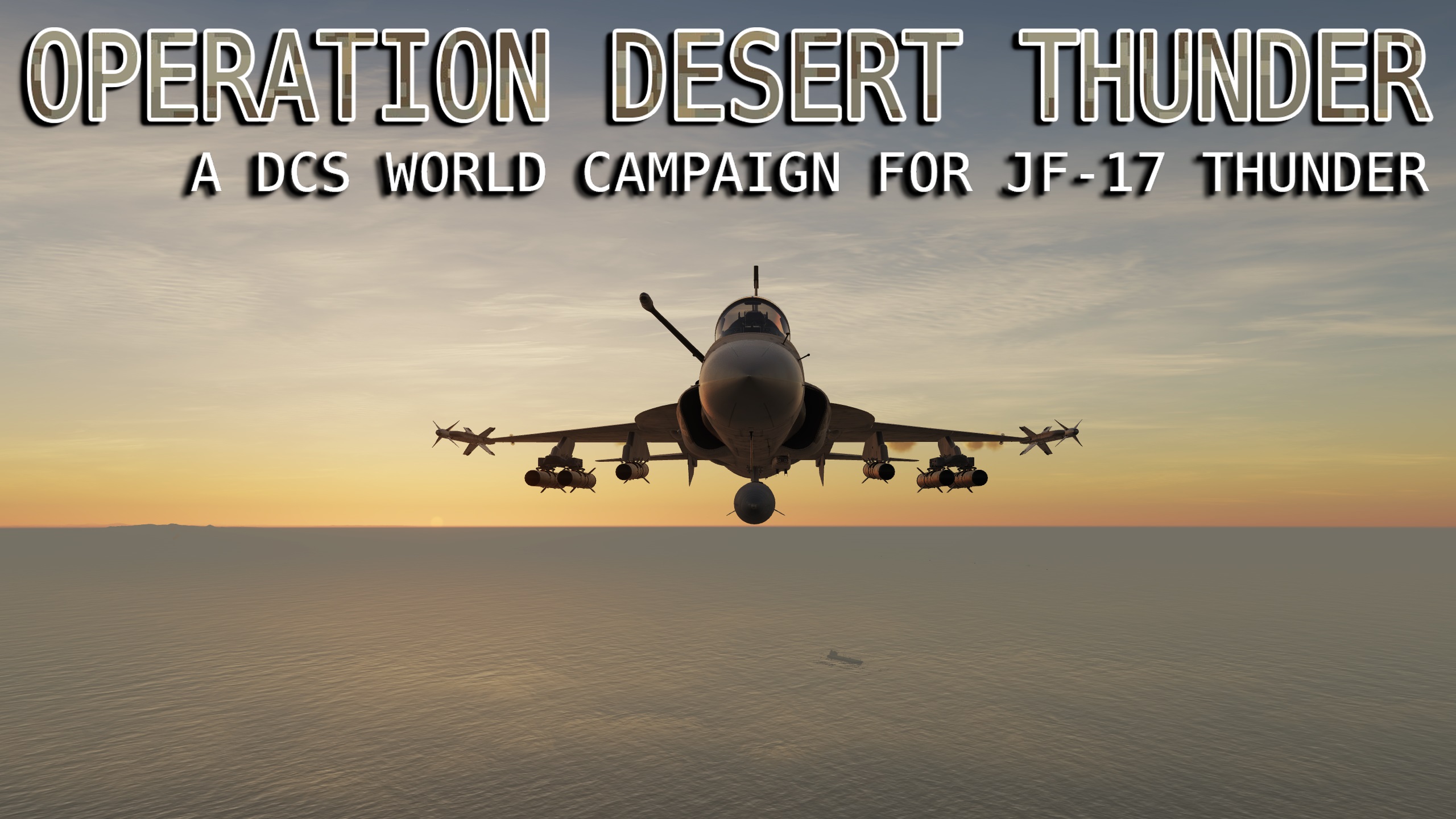 Type - Campaign
Uploaded by - JonathanRL
JF-17 Thunder: Operation Desert Thunder tells the story of Kuban Security as they undertake the mission to defend the Republic of Hormuz against the dual threats of a local insurgency and the Free State of Bastak. This is the stand-alone sequel to Operation Black Bear.

Key Features:
* Fly the JF-17 Thunder over the Persian Gulf as part of the PMC Kuban Security and their deployment to boost the air force of the Russian Federation ally of Hormuz.

* Aid your allies against both a local insurgency and the unknown agenda of the western-alligned state of Bastak and their F-16C Vipers!

* Fly together with a friend in the additional Co-Op Campaign!


The year is 2017. Tensions have been brewing between the Republic of Hormuz and the Free State of Bastak for several years regarding natural gas deposits found off the island of Qesm. So far, any attempt by the international community to mediate the dispute has been rebuffed by both parties who claim the Island as their own; Hormuz because it is within their borders and Bastak due to the many of Bastak heritage who live on the Island.

Sponsored by the Russian Federation and People's Republic of China, Kuban Security has been enlisted to bolster the air force of Hormuz with their JF-17 Thunders. It is hoped that this move will stabilize the situation and calm the ambitions of both the Free State of Bastak and the local insurrection by the Prophets Faithful.

You are THUNDER LEAD, a veteran flight leader in Kuban Security. You and your colleagues are now the Hormuz only modern air force assets and the nations last defence against the forces that seek to disrupt peace and balance in the region.

What to expect: The campaign is focused around a pilot comfortable in the JF-17 and if in doubt, Operation Black Bear should be played first.
Missions range from easy to difficult with a wide array of tasks.

IF YOU WANT TO SEE THE CAMPAIGN UNDER THE JF-17 TAB:
Unzip the "Operation Desert Thunder" Folder to Main DCS Folder\Mods\Campaigns (This may cause issues with Steam installations)

IF YOU WANT TO SEE THE CAMPAIGN UNDER THE MY CAMPAIGNS TAB:
Unzip the "Operation Desert Thunder" Folder to Saved Games\DCS.openbeta\Missions\Campaigns\en (Recommended for Steam Installations)

2.7.1
Optimized triggers in mission 9 for both SP and CO-OP. The bombs now need to hit the runway. For Co-Op, that means one runway per player.