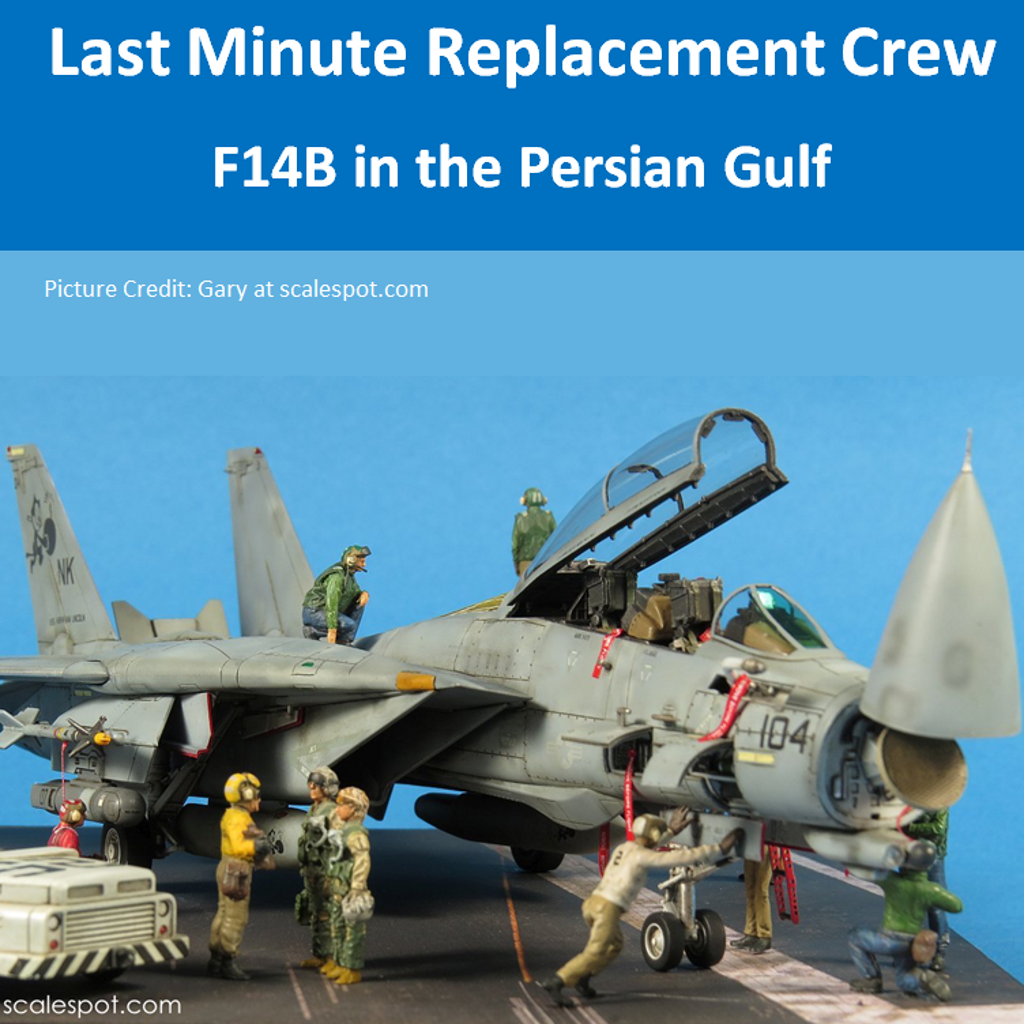 Type - Single mission
Author - Kestrel_
This is an easy fun mission (great for F-14 beginners, and also very suitable for VR) where you can simply enjoy general flying of the F-14 in an immersive story based environment, all while building a range of F-14 specific skills including the following elements:
•    Carrier take-off and landing
•    Easy navigation using the pre-planned waypoints (optional use of TACAN)
•    Airfield take-off and landing (with associated ground handling)
•    Formation flying (escort)
•    Spatial awareness
•    Aerial intercept and small dogfight (where you have a distinct advantage)
•    Aerial refueling (optional)
The mission typically takes about an hour to fully complete.  It has custom voice overs (just TTS at this stage) that provide easy to follow instructions and add to immersion.

ACKNOWLEDGMENTS:
Use of model F-14 diorama image kindly allowed by Gary from www.scalespot.com

SITUATION:
Bruiser Flight (2 ship F14B) have been sent to Al Minhad Airforce Base (UAE) to escort a UN Security Council and UAE delegation to Iran, where important bilateral negotiations are to take place at Bandar Lengeh to in attempt to resolve the ongoing territorial dispute for Abu Musa Island.
Unfortunately, Bruiser 1-2 has developed a technical fault which is unlikely to be repaired before mission start.  Therefore Bruiser 1-3 (Player) is urgently being sent fr om the Stennis as a replacement.
Recently (and unexpectedly), fighter aircraft (believed to be Mig 28s of unknown origin) have been reported operating out of Abu Musa island, which is along the flight path to Bandar Lengeh. This threat has been assessed as a critical risk to the mission. For this reason, F14’s (as the most capable type in theatre to deal with the Mig threat) have been specifically requested for escort duty.

MISSION TASKS:
1)    Take off from CV Stennis and fly to WP1 (approach point to Al Minhad Airforce Base, RW27).
2)    Land at Al Minhad Airforce Base, follow vehicle to dispersal area wh ere your flight-lead (Bruiser 1-1) and VIP jet (Sovereign) are awaiting your arrival.
3)    Wait for ground crew to configure a special transponder.  Hot refuel at your discretion.
4)    Depart Al Minhad to the west (RW27), following Bruiser 1-1 and Sovereign.  Form up at WP2.
5)    Follow Bruiser 1-1’s lead in escorting Soverigen to Bandar Lengeh airport on the south coast of Iran at WP3, noting the likely threat from Abu Masa along
this route.
6)    An E2B Hawkeye (Overlord) will monitor the mission and provide early warning and command and control if required.
7)    Aerial Tanker support is available if needed (S-3 Viking ‘Texico’)
8)    Return to CV Stennis (TACAN 74X)

DESIGNER NOTES:
I originally made this mission for my own use to practice basic F-14 skills and also to play around with the Mission Editor.  I kept adding features to it over time and then realised it was actually kind of fun, so thought I’d prepare a proper mission briefing and share with the community.

Some things for players to note:
•    There is a Humvee on each of the last 4 exits at Al Minhad which you can follow (so can choose any of these exits).
Sometimes (rarely) they get stuck mid-journey on the taxiway, in which case just steer around it and find your own way to dispersal
as marked in briefing (park next to the three soldiers).
•    The suggested Hot refuel at Al Minhad is not really necessary unless there has been excessive use of the after-burner getting there.
•    Default missile load-out is Sparrows and Sidewinders.  You may also rearm with Phoenix’s at Al Minhad.
Tags: Tags: F14, Persian Gulf, VR, Escort, Beginner, Intermediate, Scripted, Voice, Mig 28
FOLLOW US