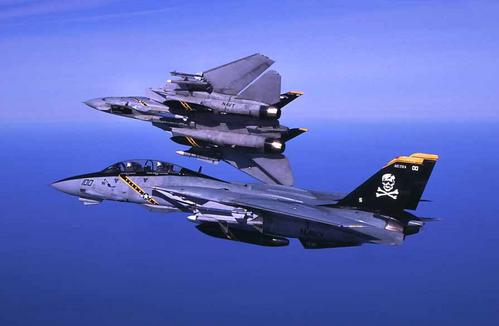 This is a pack of 14 single player missions for the F-14B Tomcat, set in the Persian Gulf in February of 2005, depicting a fictional conflict with Iran. Given the available units in DCS, the makeup of the various naval groups and the air wing is also entirely fictional, with no correlation to ships and squadrons actively deployed to the Gulf during that real-life timeframe.

The missions commence as the CSG is preparing to transit the Strait of Hormuz and begin a regular deployment. The first five missions are relatively uneventful, and useful as training scenarios. Starting around Mission 6 is where the shooting really begins. The player will experience A/A and A/G combat, along with day and night CV operations, along with a couple of opportunities to relish the scenery on the PG map. The action starts off light, then builds in intensity. The final mission is a large-scale battle that may tax your system, depending on specs.

01 Deployed to the Gulf:
Fly a CAP mission designed to help the CSG staff map Iranian air defenses in the Gulf of Oman.

02 Liberty Call at Al Minhad:
Lead a division of Tomcats to Al Minhad for a ‘show the flag’ liaison visit with the UAE.

03 Bombcat Demo:
Fly a low-level bombing mission through the UAE mountains and desert to demonstrate the Tomcat’s abilities as a striker to UAE military observers.

07 Maritime Rescue Operations:
Fly CAP over a rescue operation after the Iranians conduct an unprovoked attack on an Allied freighter in the Gulf.

11 SAR Operations:
Fly a combined AAW/ASUW SUCAP over a SAR mission to rescue an aviator downed in Gulf waters.

12 Kill the Kilo:
What? The Tomcat can’t do ASW? Nonsense. Bomb a damaged Iranian submarine surfaced at Tunb Kochak.

14 The Big Event:
Participate in a major battle over the Strait of Hormuz as the 5th Fleet forces an Expeditionary Strike Group through the contested choke point.

For mission hints/tips, see the associated file included in the zip package.