Home > User Files > Into the Darkness
DCS: World 2.5
Other 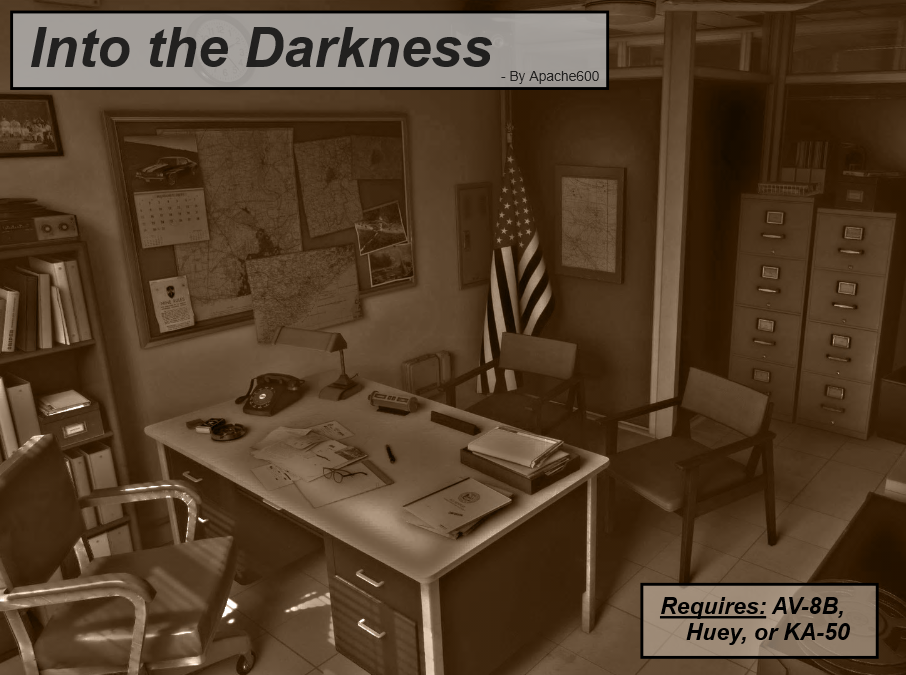 Type - Multiplayer mission
Author - Apache600
- Version 1.6 -
This mission takes place at night and requires you to safely extract important documents from a recently overrun outpost.  You must then return them to a friendly ship.

The option to reduce the number of enemy ground threats, and make the mission easier, will be available to you via the F10 radio menu for the first 2 minutes of the mission.  Another note, the more advanced / capable aircraft that the player picks, will spawn a more difficult enemy aircraft which provides CAP over the target area.

At approximately 1530 hours, the enemy launched a massive attack across the Bzipi River; and our forces stationed on the other side were quickly overrun.  Many retreated back to Gudauta, but we still have some men who couldn’t escape in time and are now hiding in and among the buildings.  When dusk broke, the enemy stopped their advance and bunkered down for the night.  This has given us a chance to regroup, and prepare for a counter attack tomorrow morning.  But that's not why we're here gentlemen; we're here for something far more important.

One of our commanding officers, who was stationed at a road outpost in the town of Lidzava, had earlier in the day received a notebook containing all the logistics data the enemy uses for supporting their war effort.  Looks like those rebel spies actually pulled through for once.  Now, why they put all this data in a notebook, and not on a computer file, is beyond me.  But the problem we face here is that when the outpost was being evacuated, the officer forgot to grab this notebook!
So that is our mission tonight, to retrieve that notebook and get it back to one of our ships.  We cannot afford to lose the upper hand that this notebook could give us.
There is one ray of hope though, a Private Higgins who was assigned to the Road Outpost, and didn’t make it out with the evacuation, had made contact with us via his cell phone.  He happens to still be at the Outpost!   We brought him up to speed on the situation, and he is more than willing to help us out.  Though he said that he would just run the notebook out to whoever is doing the pick-up, as he intends to stay with a few wounded soldiers he is tending to.
Our secondary objective is to soften up any enemy forces in the area.  This would not only lessen the enemy’s numbers for tomorrow's counter attack, but it would also increase the likelihood that they wouldn’t stumble upon Private Higgins, or any of our other misplaced soldiers, during their search of the neighborhoods.  We have also detected 2 enemy ships approaching the peninsula from the west.  They will probably be just off the coast in approximately 4 hours.  If we can take them out, that would really help cripple the resistance our boys on the ground would have to deal with tomorrow.