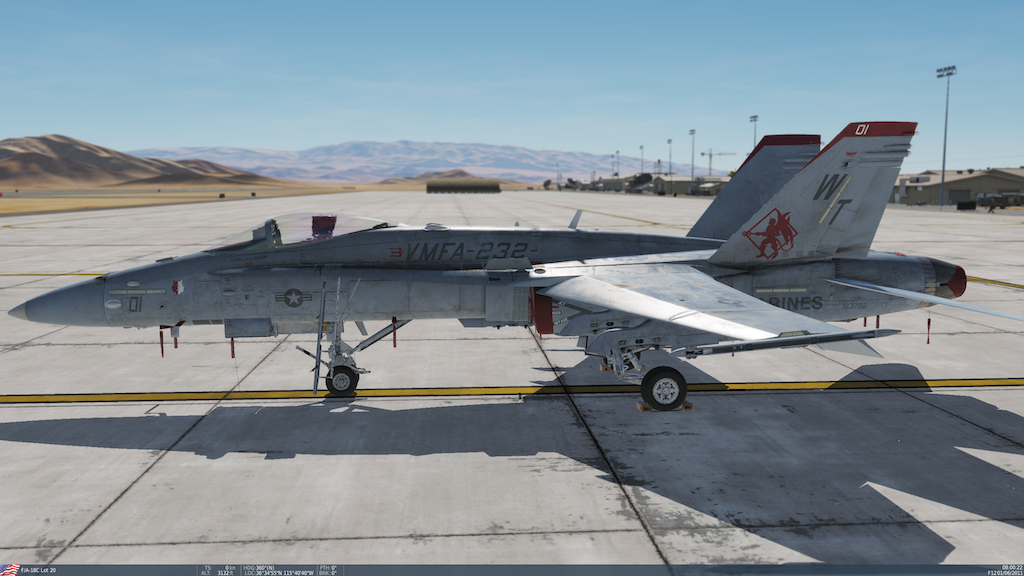 Type - Skin
Uploaded by - Tigershark
This livery is an accurate depiction of a Red Devils CAG aircraft in 1996. Every effort has been made to meticulously replicate the livery as accurately as possible using a variety of model kit instruction sheets as well as reference photos where possible.

Marine Fighter Attack Squadron 232 (VMFA-232) is a United States Marine Corps F/A-18 Hornet squadron. Nicknamed the "Red Devils", the squadron is based at Marine Corps Air Station Miramar, California and fall under the command of Marine Aircraft Group 11 (MAG-11) and the 3rd Marine Aircraft Wing (3rd MAW). The Red Devils are the oldest and most decorated fighter squadron in the Marine Corps.

1980s and 1990s
===============
In early 1989, the Red Devils began their transition to the F/A-18 Hornet. Aircrew trained at VMFAT-101 at MCAS El Toro and the maintenance department at FRAMP at NAS Lemoore, California. In June 1989, with return of aircrew and maintenance personnel to Kaneohe Bay, Hawaii, and receipt of their twelfth Hornet, the Red Devils had completed the transition.

In December 1990, with intensification of Operation Desert Shield, the squadron deployed to Shaikh Isa, Bahrain. On January 17, 1991, the Red Devils were among the first to cross the Iraqi border during Operation Desert Storm. After 41 days of intense combat operations, Kuwait was liberated as the Red Devils completed 740 combat missions and 1,390 hours. For their outstanding performance in Southwest Asia, VMFA-232 received the Navy Unit Commendation. Returning to Hawaii in April 1991, the squadron spent four short months at home before they were again deployed to Westpac.

Upon completion of their Westpac deployment in July 1993, the squadron stopped briefly at MCAS Kaneohe Bay en route to their new home at MCAS El Toro, California, ending a sixteen-year absence. In October 1993, a significant milestone was reached when members of the Hornet Industry Team presented the squadron with a plaque honoring the Red Devils for achieving 50,000 accident free flight hours. This achievement spans almost 13 years of flying in the F-4 and F/A-18.

The squadron returned to Iwakuni in February 1996 and began what was to be a most memorable WestPac. While deployed to WestPac, the squadron achieved two impressive milestones. The squadron was honored as it received both the 1995 Chief of Naval Operations Safety Award as they surpassed 66,000 hours and 17 years of mishap free flying, and the 1996 Marine Corps Aviation Association's, Marine Fighter Attack Squadron of the Year Award. VMFA-232 returned to Marine Corps Air Station Miramar in August 1996.

The squadron returned to MCAS Miramar in April 2003. In 2005, VMFA-232 became part of the United States Navy's Carrier Air Wing 11. In May 2005 they deployed with the rest of CVW-11 aboard the USS Nimitz to the Western Pacific and Persian Gulf, participating in combat operations in support of Operation Iraqi Freedom, Operation Enduring Freedom, and multinational exercises with Japan, Egypt, and India until November 2005.

In January 2010 VMFA-232 accepted two F/A-18D Hornet aircraft and left in May 2010 for a deployment to Kandahar, Afghanistan in support of Operation Enduring Freedom. While in Afghanistan the Red Devils flew 4,090 Flight hours encompassing 1190 sorties and dropped 240,000 lbs of ordnance and expended 30,000 rounds of 20mm ammunition. They returned to MCAS Miramar in November 2010.

- Any artwork derived fr om decal sheets is redrawn by hand and turned into vector graphics which can be resized to practically any size and appear sharp on the in game model.
- The release will include an image describing all the changes made to the aircraft to make it as historically accurate as possible.
- All reference material used to make the bird will be posted in the thread. This includes the decal reference sheets where applicable.
- Photoshop artwork and vector files will be posted so that other can reuse/learn/recycle techniques. Everyone contributes to this community wh ere they can and as long people don't start taking these files and passing it off as their own work I don't why we need to be precious about sharing the source files that make up the livery.

<< Liveries Forum Thread >>
The forum contains reference material and pics from which the livery was based on.