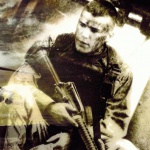 Atto: “I see not catching Aidid is becoming routine.”
Garrison: “We’re not leaving Somalia until we find him. And we will find him.”
Atto: “Don’t make the mistake of thinking because I grew up without running water I am simple General. I do know something about history. See all this? It’s simply shaping tomorrow. A tomorrow without a lot of Arkansas white–boys’ ideas in it.”
Garrison: “Well, I wouldn’t know about that. I’m from Texas.”
Atto: “Mr. Garrison, I think you should not have come here. This is civil war. This is our war, not yours.”

Only the dead have seen the end of war.

1. Pay off our Somali spy, Abdi. Deliver Khat, dollars or shillings fr om the airport to his yard, north–east end of Mogadishu. Red smoke will mark the site. Rope length is 50 feet. Take care to drop a crate in his back yard only. You can damage it, but not destroy it.
2. Abdi will drive his car to where Aidid’s top advisors are secretly meeting today: Omar Salad, Aidid’s top political advisor, and Abdi Hassan Awale, Interior Minister. Capture or kill them. If you follow Abdi’s car, take care not to engage it.
3. When Abdi stops his car, Lt. Colonel Matthews will give the assault code word, “Irene.” McNight’s Humvee column Uniform 6 will converge at the location. Super 6 and Star 4 flights will drop Rangers and Delta operators respectively to capture or kill the targets. Embark them at the airport, just by landing and opening the cockpit door nearby a chalk or fireteam; disembark the same way, land and open the door. Star 4 flight will support with 20mm cannon and 68mm rockets.
4. All units return safely to Mogadishu Airport. Crash survivors pop green flares, one every ten seconds. Get them to the airport before the Somalis massacre them. You'll score 10 points per survivor.

Tactics
* You’ll need at least three good chopper pilots skilled with Hueys and Gazelles.
* Embark and disembark chalks and fireteams simply by landing and opening the main door. If your chopper is already transporting troops, they disembark around you. Otherwise, troops embark if they are within 100 metres of each other and you are in 100 metres of them. Hueys transport eight–man highly–skilled Ranger chalks. Gazelles transport excellently–skilled four–man Delta operator fireteams. Deploy them wisely.
* Protect McKnight’s convoy, Uniform 6. Rescue survivors if helicopters go down. Look out for flare pops, one every 10 seconds while survivors remain alive. You get 10 points added to your score for every survivor returned to the airport.
* The Somalis swarm. They carry mobile phones and hate “Arkansas white–boys.” Tire–fires tell you wh ere they're heading.

Play as General Aidid on the Red side. Show these “Rangers” what Somali negations look like, down the barrel of an AK–47. Use your Militia and the Khat–infused Somali population of Mogadishu to overwhelm and prevent the capture of your Tier–1 personnel.

- Adjusted the spawning and swarming of Somalis. Version 2.1.x currently has a 'feature,' i.e. bug, which stalls the group AI controller. Groups can stop responding to tasking. Added workaround by cleaning up distant Somali mobs.
- Changed Delta fireteam to all have unit type Soldier M4 GRG. Looks more like Delta, with kneepads and small automatic rifles.

Huey AI gunners could engage Abdi, even though he's marked "invisible" to AI. Corrected by making him Blue. This also makes it easier for Super-6 and Star-4 flights to follow him on the F10 map. Many thanks to the pilots of the 924th Virtual Fighter Wing for their hard-core testing.

Changes for v0.6:
- Abdi is "invisible" to AI.
- Give Uniform 6 and the Technicals a speed of 20mph
- Never assume that there is an event initiator; even when logically there should be

Changes for v0.4:
- Updated hit scoring. Hits by disembarked groups receive triple scores for the player that dropped them.
- Reports scores every 150 seconds, at least.