Home > User Files > Attack on Krasnodar
Any version
Other 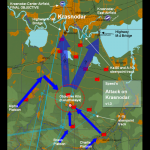 Type - Multiplayer mission
Uploaded by - 16th Speed
FC2/DCS Co-op multiplayer mission.  F-15, A-10, Ka-50 flyable.  Support a large offensive against Krasnodar.  Contains 600+ triggers, and many sound files to give the battlefield a more lively and dynamic feel.  Automatically generates AI aircraft if there are not enough humans flying.

Mission Briefing:
We are now in control of the Black Sea coast from Gelendzhik all the way south to Georgia.  If we can take Krasnodar, we can cut off and trap Russian forces to the west.

Battle Plan:
At 16:40 local, friendly ground forces began moving from our base near Defanovka to the north towards Krasnodar.  Friendly forces are divided into three groups: Alpha, Bravo, and Charlie groups, each with 12 M1s, 3 M2s, and 2 Avengers.  Our ground forces are to split up and advance across the FLOT (Forward Line Of Troops) in three places.  Arrayed against us are multiple Russian Army tank platoons.  These are marked on the briefing map and on Abris.  Note that these locations merely represent the latest intelligence we have.

The first major objective our ground forces are to capture is Objective Kilo, the town of Kaluzhskaya.  At Kaluzhskaya is a FARP we will attempt to capture and use for the rest of our offensive.

Once Objective Kilo is taken, ground forces (callsign Alpha 11) will contact the ABCCC, callsign Moonbeam, for further orders.  It is expected that the offensive will continue towards Krasnodar, with the final objective being the Krasnodar-Center airfield, but the offensive could be called off should too many casulties have been sustained capturing Objective Kilo.

Only two bridges into Krasnodar are stout enough to take the 68 tons our M1 tanks weigh- the highway M-4 bridge near the resevoir, and the highway A-146 bridge to the west across the Kuban river.  Once reaching objective Kilo, Moonbeam will assess current battlefield conditions and intelligence to decide which bridge will be crossed.

Ka-50s (simulated AH-64s)- Proceed north the the FLOT and engage Russian tank platoons prior to our ground forces coming into contact with them.  Continue eliminating Russian forces up to objective Kilo. Once objective Kilo is taken, Moonbeam will contact you with further orders; feel free to engage any Russian targets you can find in the meantime.  The  FARP at objective Kilo is expected to become operational around 18:00 local, and should be able to provide reaming, refueling, and repairing.

The enemy is known to be operating Mi-28Ns, be on the lookout for enemy helicopters.  Crystal Palace will advise if any are in the area (YOU CAN USE THE F10 MAP TO SEE THE LOCATIONS OF ENEMY AIRCRAFT!)


A-10As: You are based out of the recently captured Gelendzhik airfield.  Engage enemy ground forces ahead of the friendly advance (USE THE F10 MAP TO KEEP TRACK OF FRIENDLY GROUND FORCES).  Because the enemy is using alot of IR SAMs, it is NOT recommended that you use your gun- try to stay above 10,000 feet if at all possible.  Utilize your Mavericks at stand-off range!


F-15s:
You are based out of Sochi-Adler.  Provide constant CAP over the battlefield to prevent the enemy from engaging our ground forces from the air.  The enemy is known to be operating MiG-29A, MiG-29s, Su-27, Su-25T, and Mi-28N aircraft.  An E-3A, callsign Crystal Palace, is airborne to the south over the Black Sea to provide AEW.  For rearming and refueling, Gelendzhik airfield can be used- just be careful not the stray too far to the west or the north while landing, Gelendzhik is very near the FLOT!  (BECAUSE WE HAVE AWACS, ALL ENEMY AIRCRAFT WILL APPEAR ON THE F10 MAP!)
Tags: Attack on Krasnodar, FC2, DCS, missions, multiplayer, co-op, coop, Ka-50, F-15, A-10
FOLLOW US