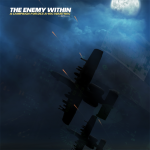 This is a multiplayer version of the most commented mission of the original "The Enemy Within" campaign.
The FRAGO and briefing is retained from the single player version of the upcoming DLC (although I am aware that the map and the briefing doesn't look very good in the MP window, it is much clearer and better looking in SP mode).

Up to 3xA-10Cs are sent to destroy defences of a fortified insurgent camp located high in Georgian mountains, close to the Russian border. The mission probably would have been a walk in the park if it weren't for a very low cloud layer making navigation and attack runs rather tricky. Requires good cooperation and good planning to successfully complete.
Tags: A-10C, The Enemy Within, Hammerfall
FOLLOW US