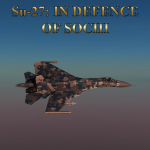 Type - Single mission
Author - DarkFire
In this mission you fly the Su-27. You and your three wingmen are the alert aircraft at Sochi Adler airfield which is about to come under heavy attack. Defend the airfield!

This single player mission is a fictional scenario in which combined NATO forces attack Sochi Adler airfield. Your mission as the alert flight at the airfield is to assist with defending the airfield from enemy attack. Shoot down the incoming bombers and escort fighters!

The mission does not require any mods and should play well with the game as-is. I have assigned several units fictional winter camouflage schemes, but if you don't have these installed it should default to general cammo schemes and I don't think it will cause a problem.

The frame rate at the start of the mission can be slightly low but I wanted to convey the feeling of a "living" airfield with static objects, moving vehicles and other things. If you find it makes the start of the mission completely unplayable do let me know & I'll post a streamlined version without the extras. If you have any constructive criticism or comments by all means email me at Sir.Wulfrick@gmail.com.

Eventually I may create the same mission from a NATO perspective for the F-15 pilots amongst us...