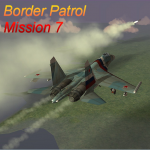 Type - Single mission
Uploaded by - DarkFire
The 7th mission in my "Border Patrol" series, in this mission you fly the Su-27. Your mission is a high-value air-kill against an enemy ELINT patrol... And may contain other surprises...

It appears that the Ukraine intends to become directly involved in this conflict. They have an An-30M ELINT aircraft orbiting over the Crimea and intelligence believes that they are monitoring our operations in order to evaluate the strenth of our force deployment. This can not be allowed. In order to simplify the tactical situation in preparation for our next phase of ground operations we intend to end the Georgian intelligence gathering patrol.
Tags: Su-27, Border Patrol
FOLLOW US