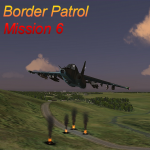 Type - Single mission
Uploaded by - DarkFire
The 6th mission in my "Border Patrol" series, this mission sees you piloting the Su-25T on a CAS mission against dug-in enemy armour in defensive positions around two vital bridges.

As allways, if you have any questions, queries or constructive criticism please email me at Sir.Wulfrick@Gmail.com

MISSION BRIEFING:
=============
Our ground campaign has begun. During the past 24 hours the 244th Motor Rifle Division has crossed the border east of Adler airfield and has made excellent progress against Georgian ground forces.

The 244th is conducting a two-pronged advance. The mountains along the border prevent easy movement of heavy armour and as such elements of the 32nd Spetsnaz special forces battalion supported by on-call Tu-22M strike aircraft form the northern prong. The 244th are modelling their northern operation on the American campaign in Afghansitan in late 2001 and it is proving to be most effective.

To the south the 244th MRD is conducting a more traditional advance with heavy armoured units and a forward reconnaissance screen.

During the night our ground forces took Bambora airfield, enabling the 339th Frontal Aviation Regiment to deploy here. Forward elements of the 244th's reconnaissance battalion have passed though the town of E'shera and are just across the river from the outskirts of Sukhumi - one of our strategic objectives.

There are only two roads along which the 244th can advance in to Sukhumi. Both cross the river just to the west of the city. Forward observers report that both river bridges are being held by enemy forces. Our mission for today is to attrite the enemy ground forces holding the bridges to enable our ground forces to advance in to Sukhumi.
Tags: Su-25T, Border Patrol
FOLLOW US