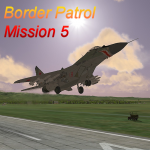 Type - Single mission
Author - DarkFire
This is the 5th mission in my "Border Patrol" series. In this mission you pilot the MiG-29S in support of SEAD strikes against enemy airfield defences.