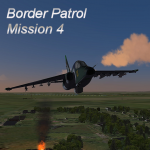 Type - Single mission
Author - DarkFire
This is the 4th in my "Border Patrol" series. In this mission you fly the Su-25T and carry out a precission strike against insurgent elements who have carried out a deadly terrorist attack.

MISSION BRIEFING:
=============
Less than two hours ago aircraft from the Kuznetsov battlegroup intercepted and shot down a number of Ukrainian and Georgian military aircraft that the Ukraine was attempting to ferry across the Black Sea under cover of darkness to bases in Georigia.

It now seems that this operation by the enemy was in part a diversion. While our brave Naval Aviation pilots were locked in combat with enemy forces a terrorist attack took place against theatre HQ outside Krasnodar.  Intelligence has been issuing reports about a local insurgent group calling itself the Abkhazian Liberation Army for some time, however until now their location and intentions remained unknown.

The situation is chaotic, however it appears that during the night insurgent elements raided a local militia depot near Karla Marksa and stole an old T-55 tank and a set of AAA guns with which to construct a ZSU-23 emplacement.

The terrorists then carried out an audacious attack on the theatre command post outside Krasnodar airfield. Eleven soldiers were killed along with four members of Brigade staff. The HQ communications array has been destroyed as have a number of short-range anti-aircraft systems. Fortunately the S-300 system providing long-range area coverage was not attacked and remains operational.

You and your wingman have been temporarily transferred from the 339th Frontal Aviation Regiment to the 32nd Special Forces Battalion at Kry'msk airfield strike back at the insurgents.

HUMINT assets and satellite reconnaissance have been able to pinpoint the house being used as a headquarters by the insurgent cell and a warehouse being used as an arms cach. The stolen T-55 MBT appears to be parked outside the warehouse next to what is believed to be a hastily constructed ZSU-23 emplacement (see the map and photographs attached to this briefing). These are your targets for today.