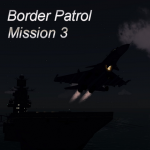 Type - Single mission
Uploaded by - DarkFire
This mission is the third in my "Border Patrol" series. In this mission you pilot the Su-33 in a very early morning interception mission over the Black Sea. You are based on the Admiral Kuznetsov.

MISSION BRIEFING:
=============
Following successful but challenging missions conducted by Frontal Aviation units over the past few days Command has decided to move the Admiral Kuznetsov battlegroup in to the Black Sea theatre to counter any further Georgian or Ukrainian aggression.

Despite our diplomatic efforts the Ukraine persists in pretending that it has not supplied any weapon systems to the Georgians. The Kremlin has decided that further diplomatic efforts would be futile. Command has ordered a full-scale military build-up of Russian forces in-theatre.

Apparently the Ukraine has ignored all Russian warnings to cease and desist and has decided to take a less subtle approach. Our AWACS orbiting to the north of Krasnodar has detected multiple flights of unknown aircraft heading south east from the Crimea. They appear to have originated around Sevastopol. Our best estimate is that the Ukrainians intend to re-supply Georgian forces by air under cover of darkness. Theatre Command at Krasnodar do not have any available assets to intercept these aircraft and as such they have requested the help of the Kuznetsov battlegroup.
Tags: Su-33, Kuznetsov, Border Patrol
FOLLOW US