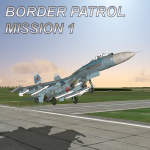 This is the first mission in a fictional campaign which involves a boder dispute between Georgia and Russia, with the Ukraine working behind the scenes with the Georgians. This mission sees you piloting an Su-27 on a fighter sweep mission.

If you have previously downloaded this mission please download it again as it has been substantially updated with better use of triggers and mission objectives.

MISSION BRIEFING:
==============
Tensions are high between Russia and Georgia. Over the past two weeks alone there have been six incidents of Georgian troops "accidentally" shooting at Russian border positions. In addition there have been several incidents of sabotage at local militia bases and intelligence indicates that Georgian agents, funded and trained by the Ukraine, were responsible.

It apears that the Georgians have been provided with previous generation fighter aircraft and anti-aircraft systems by the Ukraine. Diplomatic efforts are underway at the UN to persuade the Ukrainians that supplying the Georgians with military hardware is unacceptable, however our most recent information is that none of the aircraft or SAM systems have yet been withdrawn.

Technically we are currently at peace with Georgia and the Ukraine. The Stavka central command has however ordered that all units in-theatre are to protect themselves from aggressive action by all means necessary.
Tags: Su-27, Russia, Georgia, Ukraine, Border Patrol
FOLLOW US