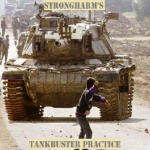 Type - Single mission
Uploaded by - StrongHarm
Welcome to Tank Busting Practice!
You'll have two groups of non-aggressive T80 Main Battle Tanks moving up the runways at waypoint 3.
They'll be moving very slowly on a south-north track. They will not disperse.
Once you kill those they'll be replaced by two groups of AGGRESSIVE T80s which will disperse under fire.
Smoke marks the 1.5nm run in point off the east and west runways;
red/orange at 5k and white at 3k.
Take off and you'll receive further instructions in the air.
Please follow all waypoints until initial attack.

NOTES:
If you want to continue the mission after death, be sure to have Permit Crash Recover set in your options.
You may also want to add unlimited fuel/ammo in options while training.
If you're having trouble hearing radio calls, turn your World and In Cockpit audio levels down in options.
To review tips and messages, use your F10 radio menu.

IP Inbound
You're 10nm from target.
Some things to remember when tankbusting with the GAU-8:
1. Alignment is important.. use the smoke as a run in reference
2. Engage your PAC and don't fight it, let it fly you in
3. Slant should be at least 15+, the more the better.. if you can still pull out comfortably that is...
4. Don't let your speed drop too much, PAC isn't as effective and you're making yourself a target
5. Practice getting beam, or a wing, on the target and rolling in at 1.5nm.. marked by smoke
6. On egress, practice velocity on both axes to avoid retaliatory fire
7. If it doesn’t look good then wave-off and go around for another try
8. Practice fire discipline. Use as little ammo as possible on each run

Congrats!
You've killed all tanks!
Try different tactics and perfect your technique. Get surgical!
Can you kill them all in one weapons load?
That's no more than 71 rounds per tank!