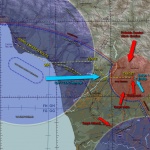 Type - Multiplayer mission
Uploaded by - LostOblivion
This is a short mission that can completed in 0:45-1:30 hours time. The mission can be downloaded as a zip file from the link below containing four versions, SP and Coop 2, day and night.

Political tensions are high between Georgia and the Russian Federation after the last conflict on Georgian soil, leading the new Georgian government falling in favour of the country joining NATO only weeks ago.

Following the recent events, intelligence suggest there exist some pro Russian cells lead by Georgian officials working undercover, many of them having great influence on the local populace. Unfortunately, after the recent turmoil, many of these officials are using their power working against the new Georgian government, some of which have led to bombings and even genocide.

Georgian agents near the suburban outskirts south of Zugdidi have uncovered the location of one such official, Vladislav Gregoric, codename "Irish".

This man's value to the Russians is significant, and a covert operation to get him out of the country is in action as we speak. It is only a matter of time before this man leaves the country, and the Russians will come to any length to make sure of his success.

A militant compound left by the Russian retreat has not yet been acted upon by NATO forces and is still very active, holding a defensive perimeter inside an urban area in the southern part of the mountains close to the Russian border. If Gregoric is fleeing the country, this is where he will go.

This morning, Georgian scouts reported that "Irish" has now left his hideout in Zugdidi and is now on the road in a 3-vehicle convoy heading north, most likely to catch an airlift out of the country and on to Russian soil.

This operation will make sure that he never reaches the border.
Tags: Mission, Singleplayer, Multiplayer, Coop, High, Stakes, 1.1.0.9
FOLLOW US