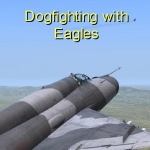 You are the flight lead for the Syrian MiG-21 four ship.  Will the Israeli's score the first kill or will you?
Теги: MiG-21, F-15, dogfight
ПРИСОЕДИНЯЙТЕСЬ К НАМ