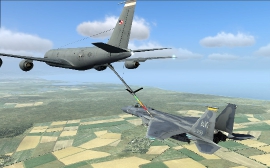 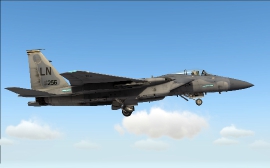 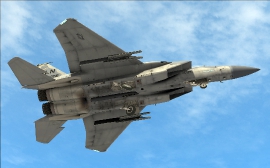 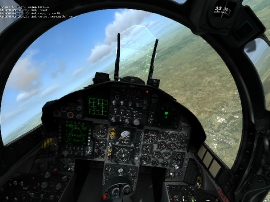 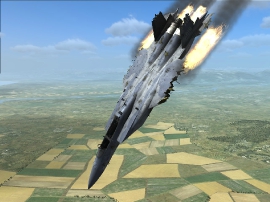 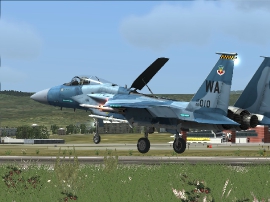 The F-15C is a jet fighter of conventional design featuring an all-metal semi-monocoque fuselage with a large cantilever shoulder-mounted wing, twin fins, and twin turbofan engines mounted side-by-side in the rear fuselage. 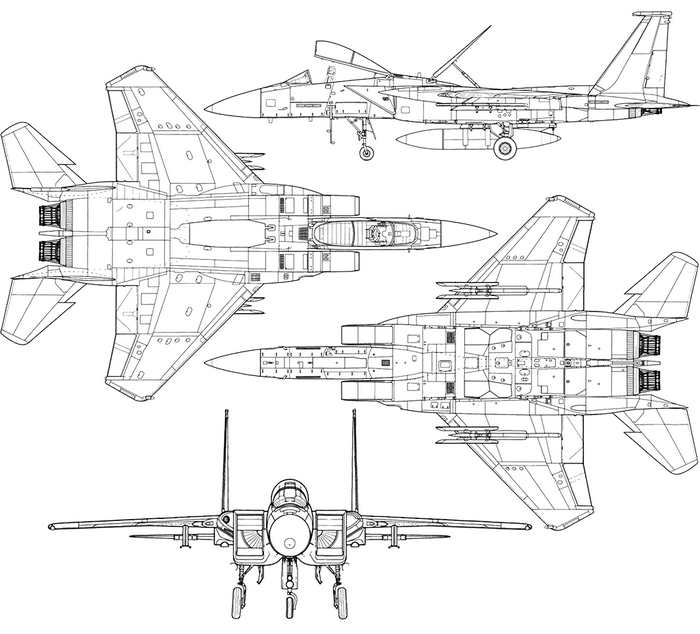 Fuselage: metal semi-monocoque structure divided into three sections, forward, center, and aft. The fuselage is made of aluminum and titanium alloys, with titanium mostly used in the inboard sections of the wings and around the engines.

The forward fuselage section houses a pressurized cockpit, nose landing gear housing, and the majority of avionics, including the radar.

The dorsal-mounted airbrake is located above the center section, with the maximum deviation angle of 45°.

The main load-bearing elements of the aft section are two rigid tail booms that straddle the engines and the arresting hook.

Cockpit: bulging bubble canopy made of polycarbonate with acrylic coating. The bubble canopy provides an unobstructed view outside the aircraft. 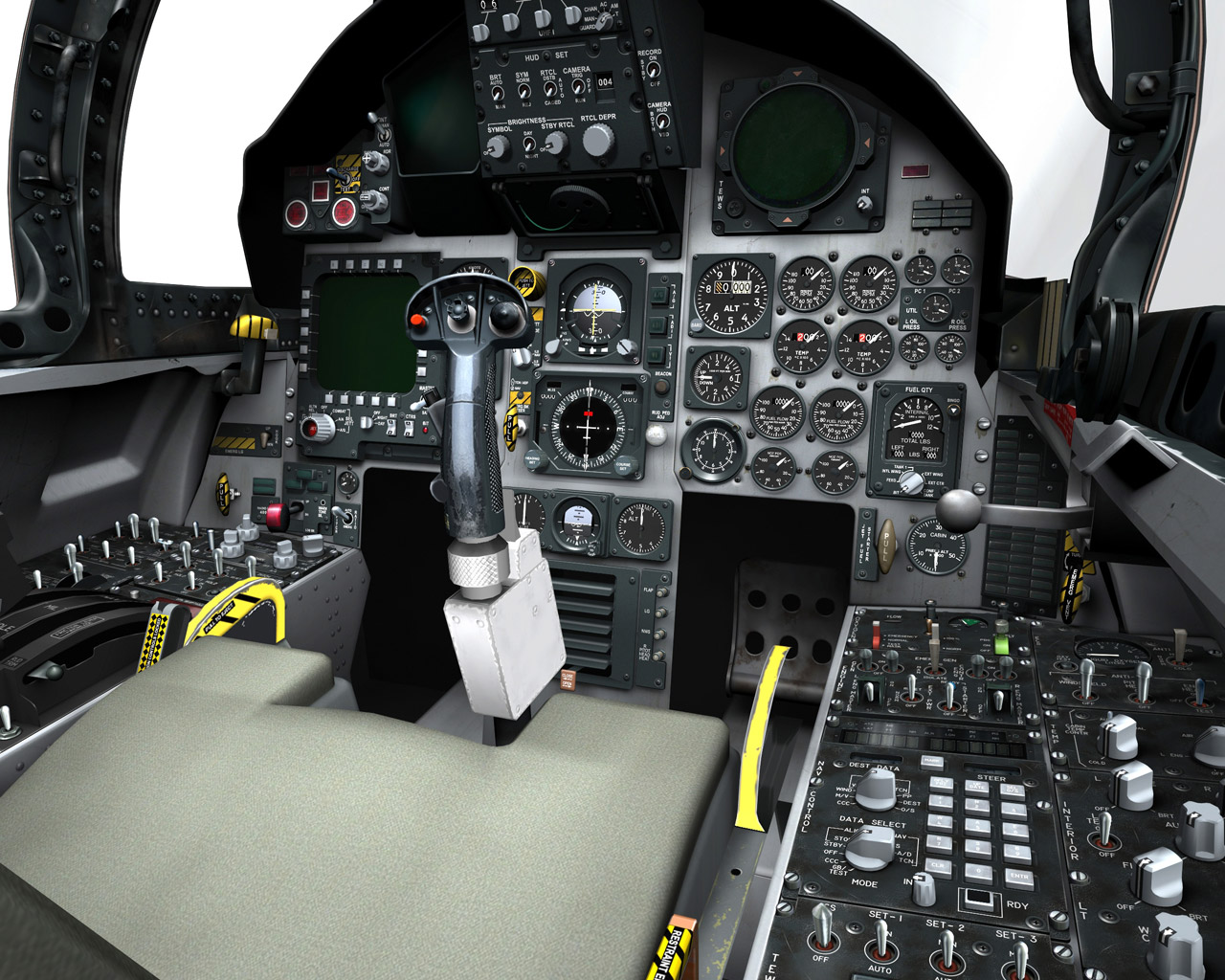 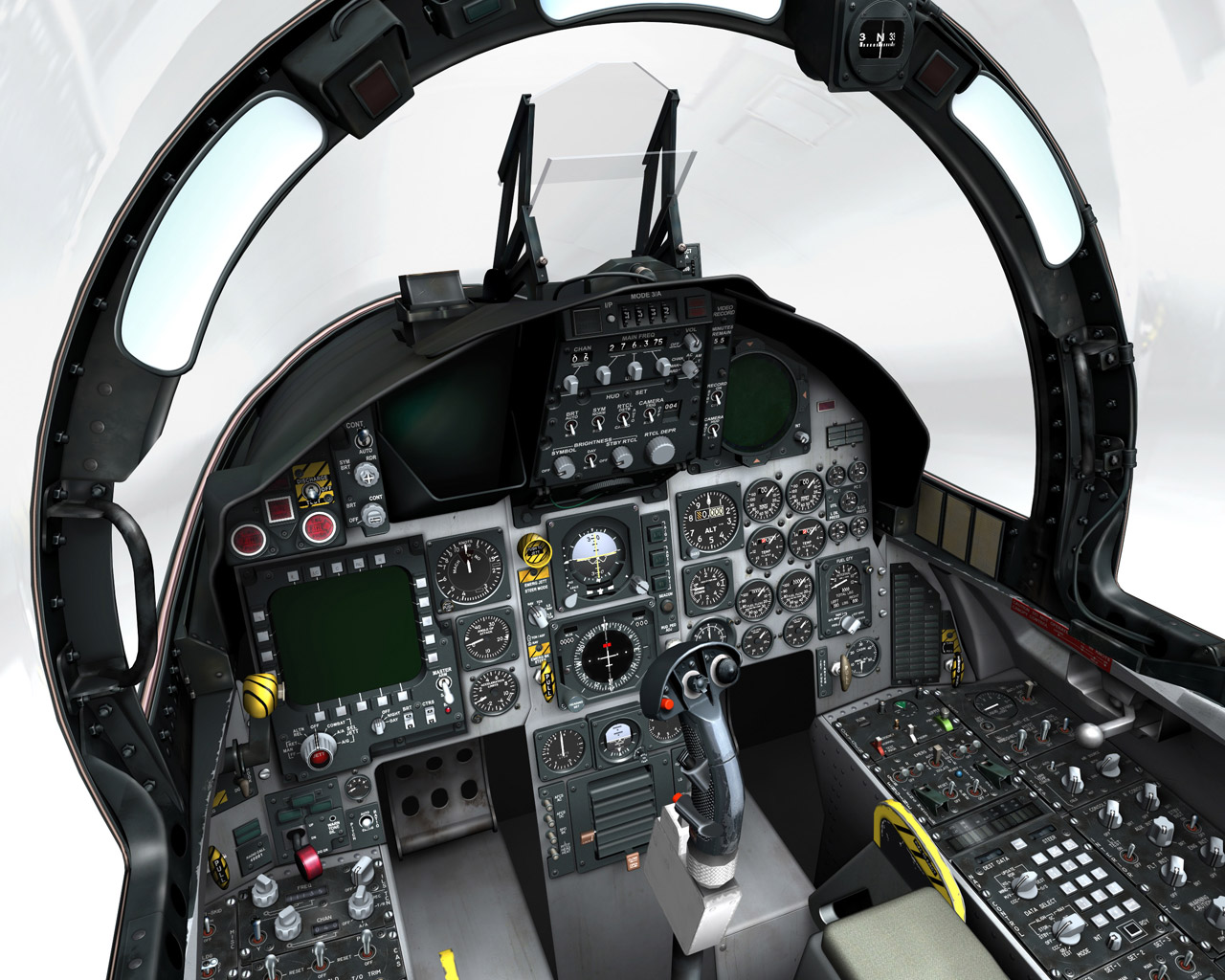 The fighter’s pressurized cabin is equipped with air conditioning and liquid oxygen system.

The F-15C is equipped with the McDonnell Douglas ACES II ejection seat, capable of ejecting the pilot in zero-zero conditions and up to the aircraft maximum altitude and airspeeds of up to 1,100 km/h. At zero airspeed, the catapult fires within 0.3 seconds, followed by the rocket sustainer in 0.45 seconds, separation of the pilot from the seat after 1.3 seconds, and opening of the parachute pack in 2.3 seconds.

The Wings are fixed-geometry, 45 degree shoulder-mounted swept wings. The wings are optimized for dogfighting at 550 kts and provide best performance at that airspeed, with decreased performance at other speeds. The wing has a slight one-degree anhedral which reduces stability in the rolling plane. The characteristic raked wingtips are designed to reduce buffeting. The leading edges have a conical camber optimized for higher G-loads.

Uncharacteristically for a fourth-generation fighter, no spoilers or leading-edge extendible slats are fitted.

Leading and trailing edges are of conventional light alloy rib and skin construction, while the wingtips are of aluminum honeycomb construction.

The twin Vertical Stabilizers consists of two interchangeable fins with rudders mounted on the base, and also mount the RWR and ECM antennae. The outer sections, leading and trailing edges of the vertical stabilizers are aluminum, while the inner section and the rudder are made from boron/epoxy composite material. 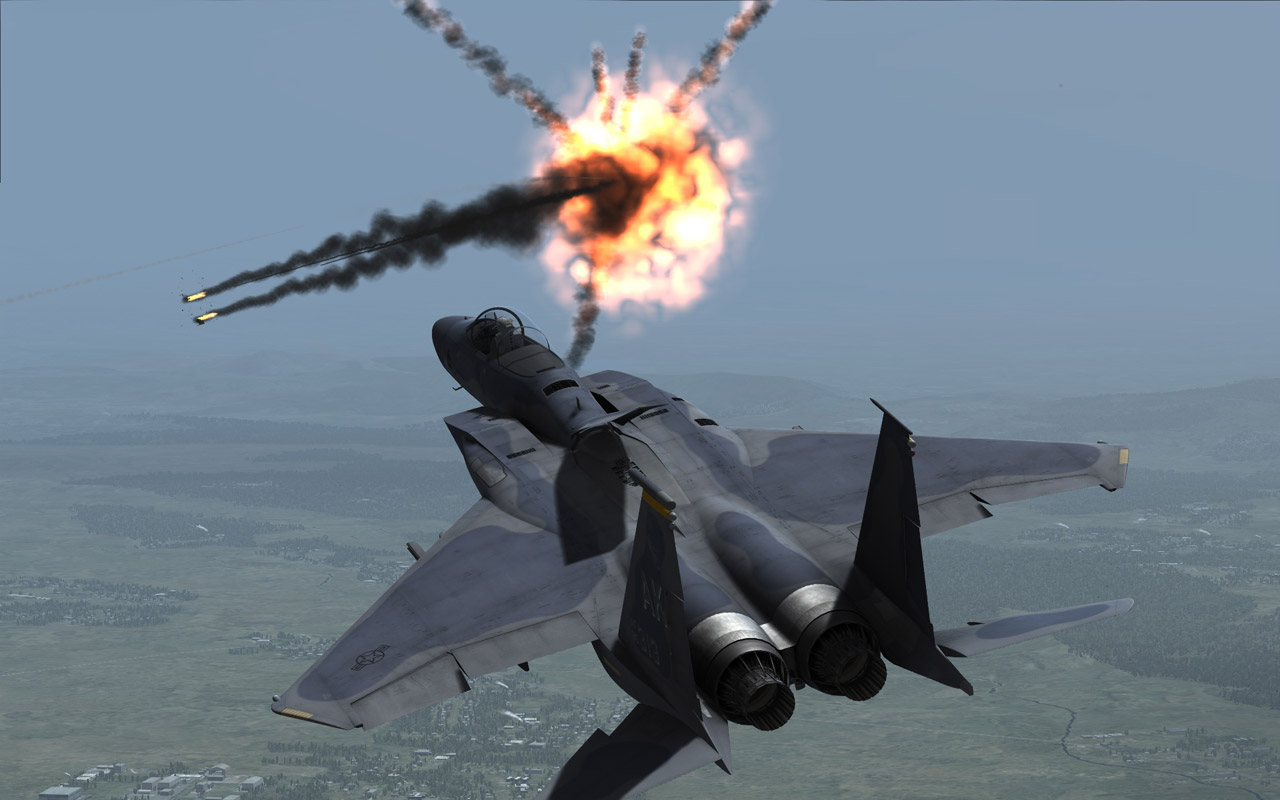 The interchangeable Horizontal Stabilators on the F-15 rotate as a whole, providing both flight stability and flight path alteration along the pitch axis. The stabilators can rotate independently from each other, or in unison.

The leading edge of the horizontal stabilator has a sawtooth shape, which eliminates harmful resonance at supersonic speeds.

Similar to the vertical stabilizers, the surfaces are made of aluminum and boron/epoxy composite.

The fighter's retractable tricycle Landing Gear retracts into the fuselage, the legs turning 90 to lie flat in under-fuselage wells. 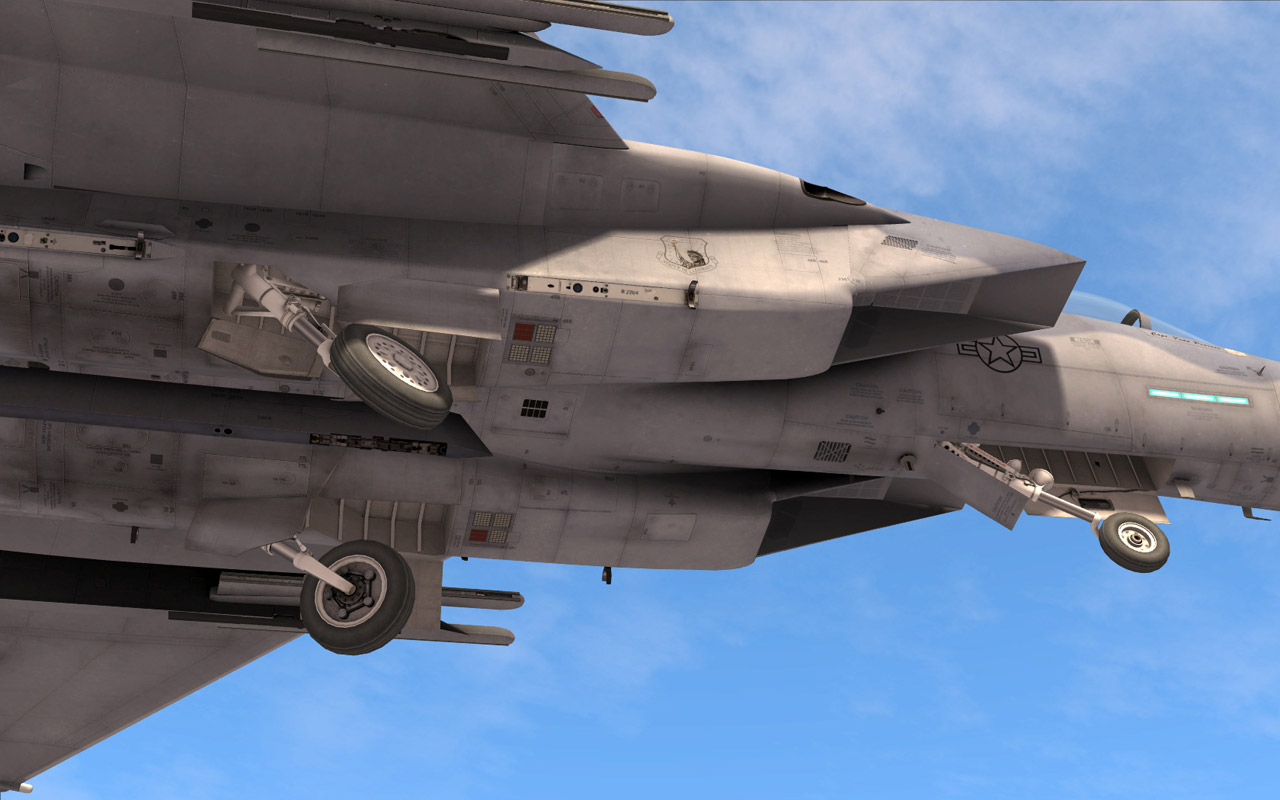 The undercarriage track is narrow at 2.75 m.

The F-15 is also fitted with a retractable arresting hook for emergency situations when the wheel brakes have failed.

The F100 has a dual spool axial compressor with 3 fan and 10 compressor stages and inlet variable vanes, 2-stage low and high pressure turbines, a combustion chamber, and an afterburner spray ring. 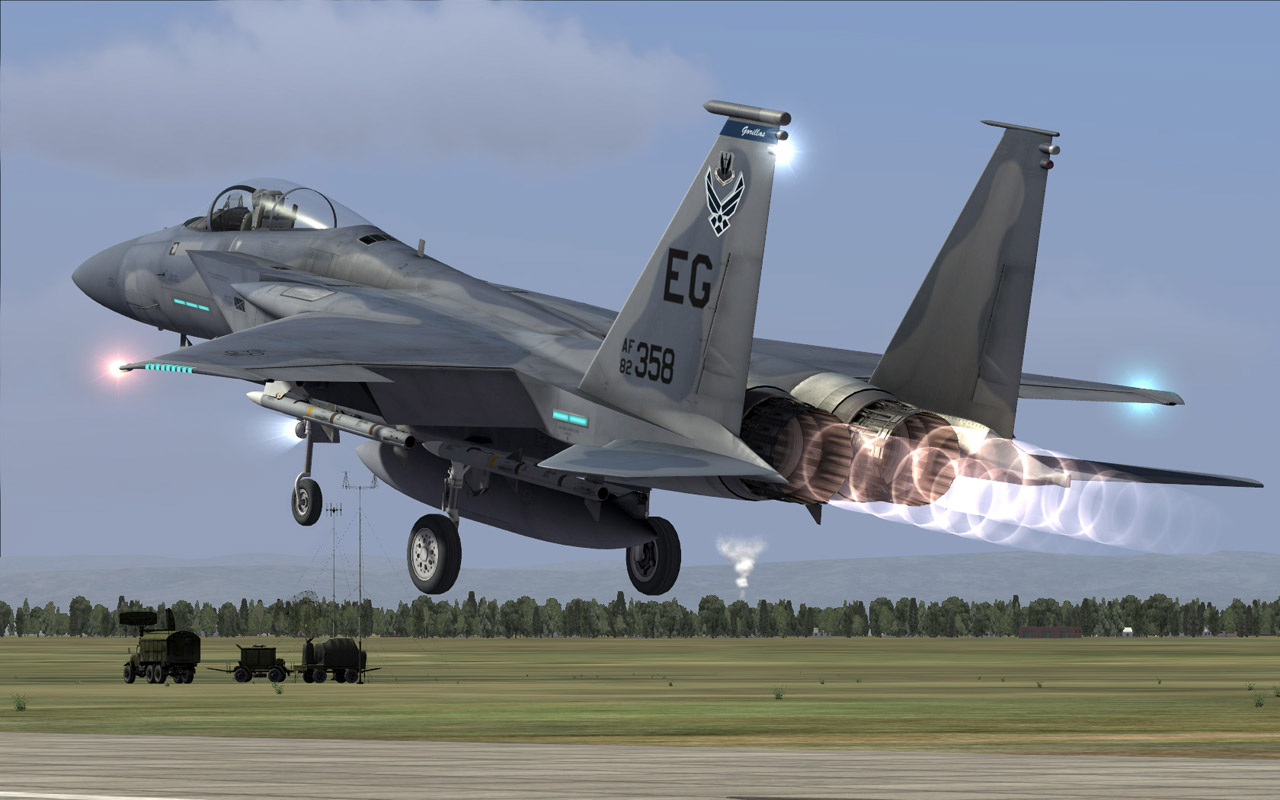 The engine control system (ECS) comprises a primary digital control and a secondary hydro-mechanical control mode used as a back-up.

The Auxiliary Power Unit, or Jet Fuel Starter (JFS), is housed centrally between the two engines, which allows for the twin engines to start on the ground.

Air Inlets work independently of each other and consist of three variable ramps each, a variable diffuser ramp and a variable bypass door to control the airflow. The bypass door is used to relieve excess pressure in the inlet duct. Ramps move by utilizing the F-15's hydraulic power system.

Position and air flow control is provided automatically, based on Mach number, temperature, angle of attack, and other parameters.

The first variable ramp is pivotally suspended and can pivot between 4° up and 10° down. The overall goal of the system is to provide the engines with smooth optimal airflow.

All aircraft systems described herein are based on the actual systems used in the actual F-15C Eagle.

Realism is the main cornerstone of the Advanced Flight Model (AFM) implementation for this aircraft.

The main goal for this F-15C simulation is realism in all aircraft systems, affecting the fighter's flight characteristic, and taking into account all aerodynamic forces and external environmental factors.