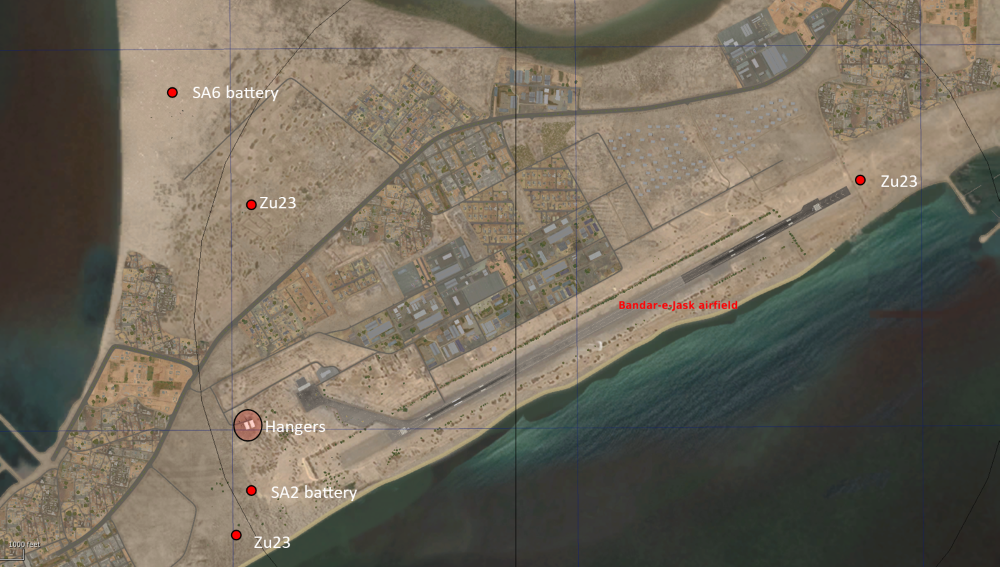 Type - Single mission
Author - Hedgeslammer
The Tarawa has been deployed to the Persian Gulf, and the spooks have found plans to attack shipping in the area by an Iranian Revolutionary Guard Rocketry unit.
Unfortunately, the missiles they're planning on using are protected against an approach from the sea by SA3s & SA6 batteries.

Fortunately, we have a cunning plan.

This is the first in a series of missions operating around the Persian Gulf - the Pirate Voyage of the Black Pearl...

Also, F15s provide CAP for the mission - You can fly those too if you like.

Situation:
Welcome to the Persian Gulf.  The Tarawa group is currently cruising up the Gulf of Oman on its way to help police the area and discourage Iranian interference with shipping. For this cruise, the Tarawa is assuming the callsign Black Pearl, and missions will have a pirate theme.

The airfield at Bandar-E-Jask – codename Blackbeard - is relatively small, but provides cover against attacks to the port and the local part of the straits.

It also hosts an Iranian Revolutionary Guards rocketry regiment which regularly carries out 'exercises' with surface to surface missiles.

Intelligence reports they are about to begin a new exercise which is actually a cover for an attack against shipping targets in the area using Silkworm missiles.

Radar and missile launchers have been delivered to 2 large white hangers at the south west end of the airfield and these are the primary target of a strike by harriers from the Black Pearl (Tarawa).

An attack from the sea is likely to be intercepted by the SA6 and SA3 batteries defending the area, as well as Phantoms based at the airfield, so we have a cunning plan.

Objective:
Two flights of Harriers will take off from Khasab airfield (having flown there the night before from The Black Pearl (Tarawa) and disrupt the 'exercise' before it can cause any damage.

They will fly up the coast and then drop to wavetop level to avoid detection, traversing the mountains and attacking their targets from the north, hopefully out of radar detection until it's too late.
Then it's just a quick transit back across the sea to land onboard the Black Pearl for tea and medals.

The whole flight should be complete within an hour, although fuel will be a little tight, so don't hang around.

COLT FLIGHT
Type: 2x F15C
Freq: 124MHz
Task: CAP
Take off: First up - 0510
We know about the 2 phantoms at the airfield, but other flights from other airbases might also try to interfere with our operation - your job is to stop them.
Qeshm Island airbase is home to a squadron of Tomcats - they're not well equipped - Sparrows and Sidewinders only, but remember - you're not free to fire until the first shot has been fired by the Iranians.
ROE: Do NOT fire first.  You aren't clear to fire on any aircraft until the Iranians fire first.
However, once the first missile is out, you're weapons free.

SPRINGFIELD FLIGHT
Type: 2x Harriers
Freq: 264MHz
Task: SEAD
Ordnance: 2x AGM122, 38x FFAR HE rockets, 4x Rockeyes
Primary targets: Both SA6 and SA3 radars to be destroyed.
Secondary Targets: Zu23 emplacements have been spotted at either end of the runway. These pose less of a threat, but harassing them will keep them from attacking the strike Harriers.
Air Threats: 2x F4 Phantoms are based at the airfield and will try to scramble if you're detected.  Stay below 500 feet once you've passed waypoint 1 to try and avoid detection.
If you see them preparing to take off, you might want to attack them on the ground, otherwise you could have an exciting flight back to the Black Pearl.
Take off: After Colt, approx. 0510


DODGE FLIGHT
Type: 2x Harriers
Freq: 243MHz
Ordnance: 4x MK82air, 8x Zuni rockets, 2x AIM9M
Primary Target: The two white hangars nicely placed side by side approx. 700m west of the end of the runway. Your approach from the north means they'll be partly obscured by local housing - be careful of collateral damage - we don't want to make the situation worse than it already is.
Secondary targets: Any targets of opportunity in the area such as the Zu23s and SAM launchers, but your main goal once the primary is destroyed is to head home to the Black Pearl.
Take Off: After Jolly Roger, approx. 0515

Other notes:
Bullseye:
North tip of the mainland.