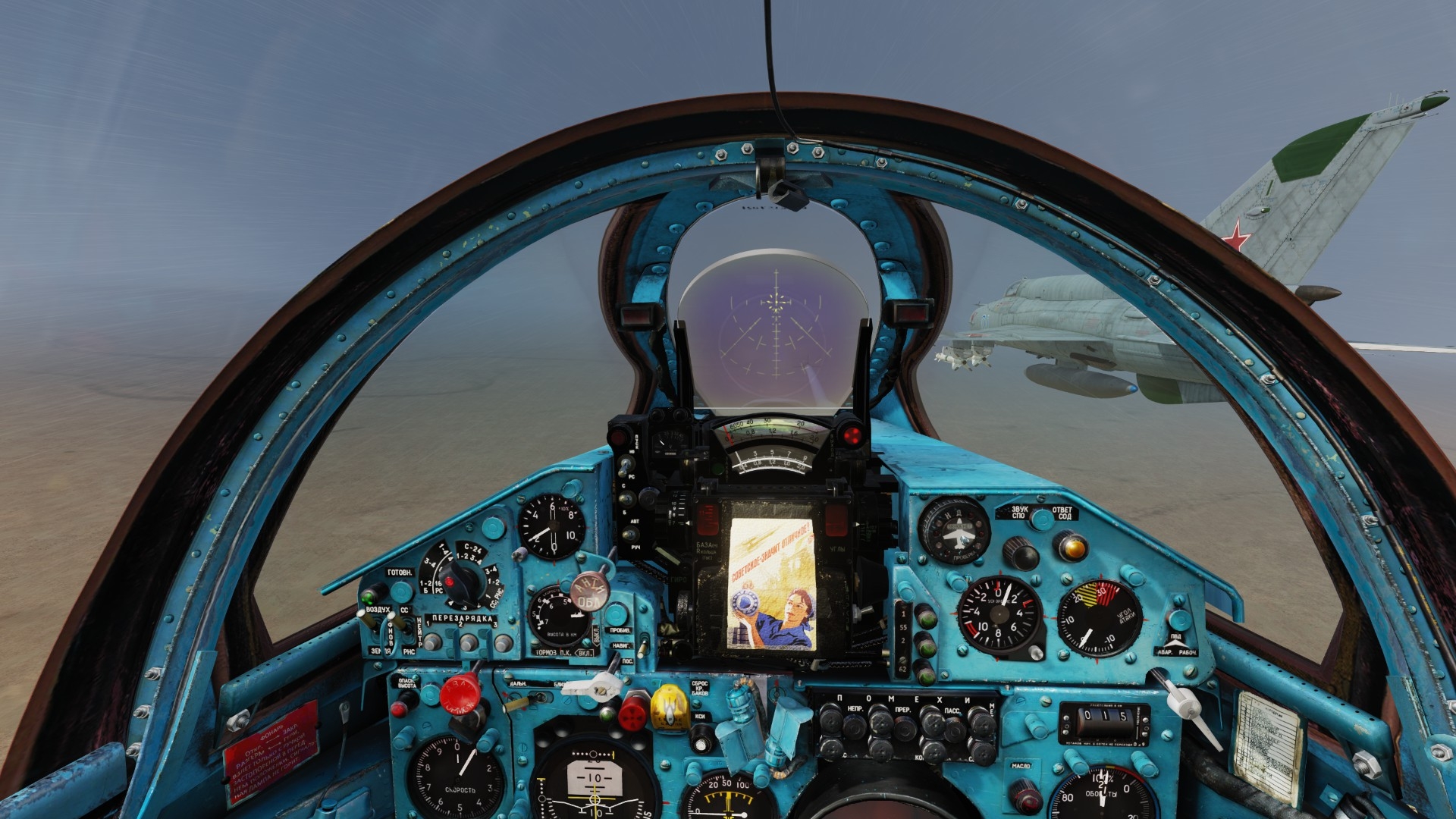 Tipo - Livrea
Caricata da - rossmum
Complete (mostly) rework of almost all labels, placards, etc. in the cockpit, both day and night versions. ASP colour adjustment to reflect deeper black paint used on some 21s. Fonts, typos, wrong labels all fixed; night backlighting now has a bit more 'bleed' to it (you may want not want to use full backlighting brightness as I got a bit carried away, it looks best at half intensity). The ASP has a cool Soviet poster on it, since this is just taking files from my personal cockpit rework and I'm too lazy to apply the same fixes to the original ASP texture so that there's a version without the poster, which itself isn't even finished. I might do that one day.

The longer I looked at the cockpit, the more something was bugging me. The font didn't quite look right. Turns out it wasn't. Then I started noticing typos, so I hunted down references from various MiG-21 cockpits to try correct them. Then I saw the wing tank jettison safety guard was mirrored, so I fixed it. Then I noticed some systems were referred to by incorrect abbreviations, or were referencing systems from other variants, so I started adjusting those, too. Then I realised the instruments would need adjustment, and also I figured the backlighting could use a little more bleed, soooo...

Extract to the Mods/aircraft/MiG-21bis/Liveries/Mig-21_CP directory in your game install folder. Once you load up the game, go to the options menu, then special, then MiG-21 and sel ect "Reworked Labels" fr om the cockpit livery dropdown menu.

- Light bleed on backlit labels can be a bit excessive at full intensity. I recommend half, it looks better that way. Full intensity is OK if you're weird like me and like turning the lights on even in broad daylight, but at night, use half.
- The poster on the ASP doesn't have proper roughmets or normal maps yet. I'm lazy. It will get them at some point, along with an option to remove it (but keep the changes to font and illumination).
- The lum paint on some labels/switches, particularly on the ASP, is perhaps a bit too bright and 'clean'. I don't remember how this came about, because it used to not be. I think there might've been a global illumination adjustment or I just adjusted the ASP texture and forgot to adjust the alpha channel. It may or may not be fixed in future. Just roleplay that they swapped in a new sight head or something because the last pilot to land the jet was a DCS player and put his helmet through the sight glass on touchdown.
- There is some aliasing on a few labels when zoomed out, particularly on the right side wall and main panel. This is due to how I made the labels and to fix it would require me redoing half the project, so I won't. You probably wouldn't notice if I didn't tell you, anyway.
- ASP is missing its serial number and such. Yes I care enough to add silly things like this. No I don't know when I'll get around to doing it.
- I can't guarantee there aren't still some typos hiding in here. I am not a native Russian speaker.

- SAU panel
- RSBN panel
- Probably fix the mismatch in lum paint brightness at some point
- Maybe redo the canopy frame placards. Most of them seem more or less correct and finding good references is a pain. Not sure.
- Fix normals and roughmets for ASP poster, do version without poster (maybe)
- Possibly redo radio/RSBN channel placards to look more... authentic? Including rewriting actual entries by hand on preformatted placard. Cyrillic cursive! Fun!
- Maybe, possibly, *very tentatively* different cockpit colours. Do not ask for grey or black, this is a holy place and I will not defile it. Options may include the more typical (and classic) Soviet turquoise as well as the darker teal of the Yugoslav L-17s. Technically this mod mostly works with cockpit recolours as it is - however to correct both the wing tank jettison guard's mirrored text and the periscope's incorrect label, I had to edit two of the base cockpit textures and these will show as the default Bulgarian blue. You can chop and change these yourself if you really want to use this with another colour cockpit, go wild. Just know I will judge you if that cockpit is any shade of grey or black.

As there is a major cockpit overhaul planned that will probably involve a complete redoing of the entire thing in terms of both mesh and textures, consider this a very high effort interim fix. I have medical papers certifying me as a Level 2 Rivet Counter, please no bully.
Tags: mig-21, cockpit, labels, illumination
FOLLOW US