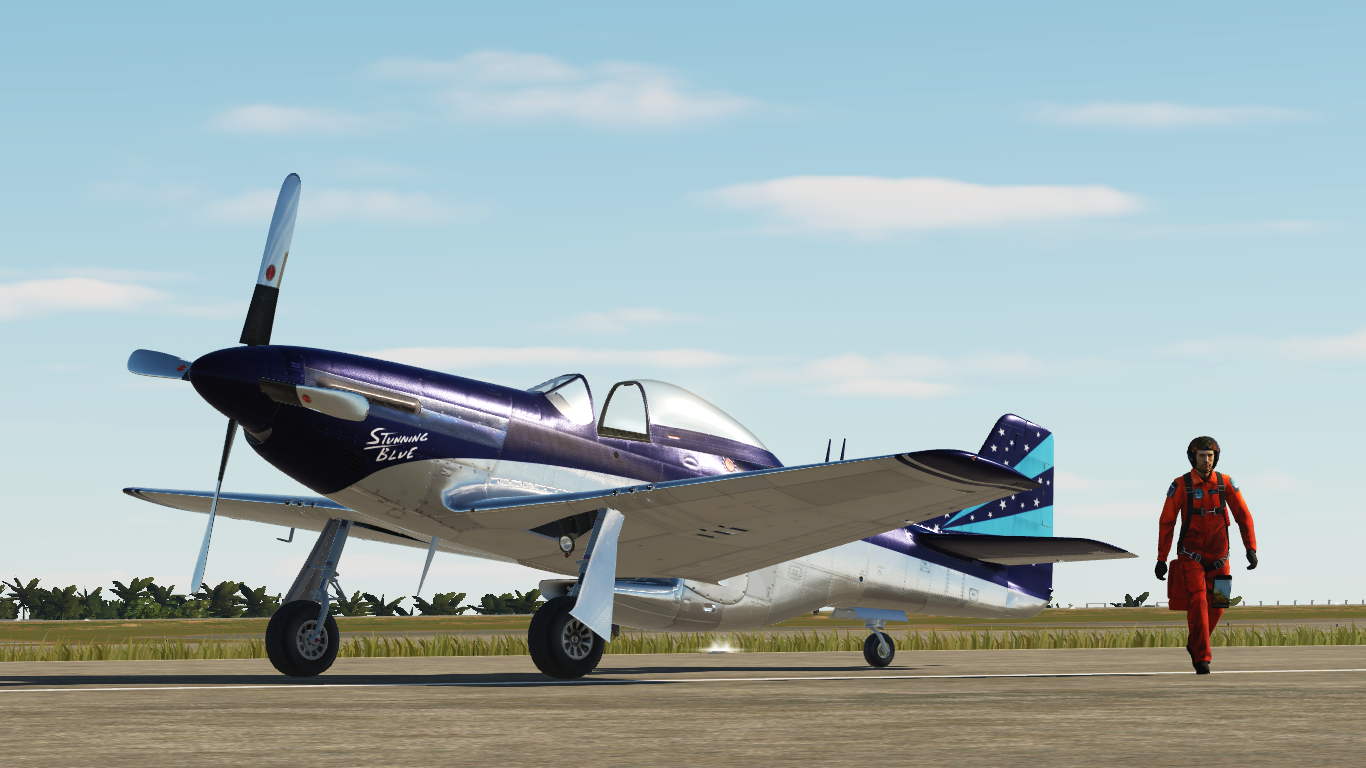 A fairly simple livery design, this skin was made for the TF-51D but since it shares most of its external model with the P-51D (at as of the time of writing this, DCS version 2.7), if you wish to use this livery on the P-51D you should be able to do so by simply placing this livery on the P-51D liveries folder with no modification. I do not own the P-51D but have tested it on the Model Viewer, and the external textures work - the internal textures (first person pilot in cockpit view, and cockpit photo) might not work in the P-51D, and the cockpit photo almost certainly does not, but I have not been able to test this.

What started as a quick, fun little project ended up getting a bit out of hand and so this has custom patches (utterly meaningless aside from serving as eye candy), a helmet with a tinted visor instead of the default transparent one with the tint baked into the helmet texture, and an orange flight suit (both in external 3rd person and cockpit 1st person view) because orange flight suits are cool. If you are a novice livery maker and want to see how these things were done, feel free to take a look at the description file - most of what's going on is commented.

This also features a cockpit photo - DCS actually has provisions for this (again, as of DCS 2.7), but the standard cockpit photo file is transparent. In this livery, that space is occupied by a small note with engine operating parameters (most of which you already have in the placard to the pilot's right) but I strongly recommend you replace that file with a photo of something you like! If you've never touched a DCS skin file before, don't worry, it's quite easy.

In order to replace the cockpit photo, you need to replace the mustang_photo.dds file inside the livery's folder (the one you get when you download this livery, with all the texture files inside) with an image of the same name. You can open that file with an image editor such as GIMP or Photoshop, copy and paste the photo you want on top of it, and then export it. You can overwrite the original file, or rename the original file and save the new one with the mustang_photo.dds name. Alternatively, if you do not wish to use an image editor, you can pick a .bmp (Bitmap) image file and save it as mustang_photo. This is not ideal, but it should work (note I haven't tested this on the TF-51 cockpit model). In that case, pay attention to the image's dimensions: It should be a 512x512 image or a multiple thereof (for instance, 256x256, 1024x1024, etc.).

A quick note: As stated, the cockpit photo will almost certainly not work on the P-51D's cockpit. This is because, while the external models of the TF-51D and the P-51D are largely the same, their cockpit models are fairly different. Nevertheless, looking through the forums I found out the "hidden" cockpit photo feature exists (or used to exist) in the P-51D as well, so you might be able to get it to work on the P-51 by changing the "tf51d-cpt_photo" line in the livery's description file to "p51d-cpt_photo" or something similar.  If anyone tries this on the P-51, I would love to hear whether it worked or not.

Enjoy the livery, and take good care of your Mustang's engine - it is a bit temperamental!