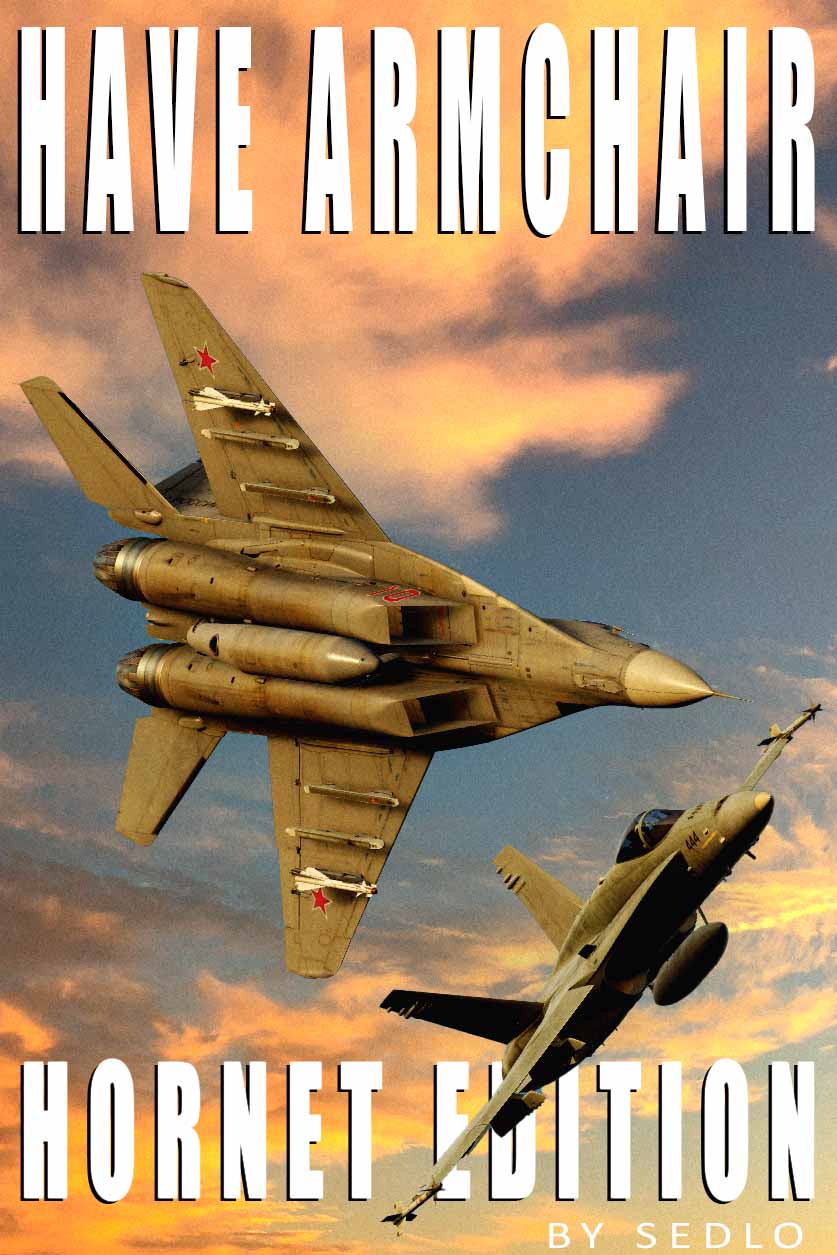 1.  UNZIP THE FOLDER INTO YOUR C:\Users\XXX\Saved Games\DCS.openbeta\Missions\
2.  Mission documents inside mission folder.


(S/NFD) The HAVE ARMCHAIR series of evaluations is designed to investigate the tactical capabilities of the Russian MiG-29A aircraft, the new R-60 Infra-Red Air to Air Missile and the upgraded Russian helmet mounted display when used against front line USAF and USN fighter aircraft.

Results of the performance and flight test evaluations, system and subsystem characteristics, design features and technical information acquired from the exploitation will be presented in a future FTD technical manual and disseminated to the USAF Weapons School and USN Fighter Weapons School for incorporation into front line t

TEST ENVIROMENT AND OVERVIEW OF PROCEDURES

1.     (S-NFD) Offensive and defensive tactical capabilities of the MiG-29A will be assessed during air combat maneuvering with selected tactical US aircraft.  Basic fighter maneuvers used and described in AFM 3-1.
2.    Both aircraft will depart the test site and proceed north west to the test ranges.  The flights will be monitored and recorded by BLUEBIRD.
3.    Flight test 1 will consist of four (4) head to head engagements over RANGE 74A, 74B, 74C, 75E and R-4807B.
4.    Flight test 1 will also consist of neutral fight set ups only – Both test aircraft will approach each other in a neutral, head to head pass.  No simulated weapon release will occur prior to the merge.
5.    Since the goal of the mission is to evaluate both the R-60 seeker head performance, as well as the Russian helmet mounted sight, all simulated weapon employment will be IR missile and gun only.

1.    After engine start, flight will check in on VICTOR 16.
2.    Flight will taxi to runway 14 via taxiway CHARLIE
3.    Approaching runway 14, flight will switch to tower frequency
4.    On departure, the flight will commence a right turn towards waypoint 1 and contact BLUEBIRD on UHF preset 10.

1.    The flight will proceed towards waypoint 1 (REGEN EAST), at which point, SOUND 1 will break off and head to waypoint 2 (REGEN WEST), while SOUND 2 will orbit waypoint 1 and await the fight’s on call fr om SOUND 1.

1.    At the fight’s on call, both aircraft will turn in and merge over the KAWICH VALLEY.  There will be no simulated shots until the merge.  (DESIGNER’S NOTE: The mission requires the 2 aircraft to pass within 6000ft of each other.  Failure to obtain this distance or less at the merge may break the triggers on the mission)
2.    Once at the merge, both aircraft are free to maneuver as required to obtain a valid IR missile shot or guns shot. (DESIGNER’S NOTE: Make sure you have your master arm on and actually fire your missile or gun.  The enemy is set to invulnerable, so your shot will not shoot it down)
3.    If a missile or gun kill is registered, there will be a “KNOCK IT OFF” call, at which point, both aircraft will return to their respective hold points (Player returns and orbits waypoint 1 (REGEN EAST).
4.    Once the player is established in an orbit within 1 nautical mile of waypoint 1, AND the AI MiG has returned over waypoint 2, the next fight will commence.
5.    At the end of four (4) engagements, both aircraft will rejoin and proceed back to land at HOMEPLATE.

HAVE DRILL and HAVE DOUGHNUT was a program in the late 1960’s in which the United States obtained Soviet built MiGs and flew test missions with them from the Groom Lake test site.  The goal was to explore the capabilities of the Soviet jets, and to develop tactics and procedures to counter them effectively in combat.
(see https://en.wikipedia.org/wiki/HAVE_DRILL or https://en.wikipedia.org/wiki/Have_Doughnut for background information)

There are three versions of this mission, once having the player aircraft at the F-16C Viper, one with the F/A-18C module and the third the Heatblur F-14 module.  Each version works identically.  NOTE: When referencing radios, UHF (Uniform) radio refers to COMM1 and VHF (Victor) refers to COMM2.

My goal in making this mission was to imagine a HAVE DOUGHNUT type program, but using modern Russian and American jets.  While I’m sure there have been actual programs that evaluated more modern Russian aircraft at Groom Lake, these efforts remain classified to this day.  However, there have been several photographs of Russian built aircraft over the deserts of Nevada in modern times, as you can find here: https://www.lazygranch.com/groom_lake_birds.html.

Below is a list of things you will need to know and/or perform in order for this mission to work successfully.

I’ve tried to make this mission feature realistic communication calls and procedures.  To that end, realistic comms forced on in this mission, and it will require you to tune your specific radios to specific channels or frequencies as required.

For example, at the mission start, once your engine is running you will be prompted to contact your flight lead on VHF channel 16.  You will need to switch your COMM2 radio to preset 16, and once you do, the next radio call will play.

Each time you are required to change your radio channel, a text box will be visible in the top right of the screen.  This message will remain on screen until you tune the correct radio to the correct channel/frequency.  Once you do, the next voice over / radio transmission will play and the mission will continue.

Do not forget to MONITOR GUARD!

You are flying as the number 2 in a flight which consists of your lead, SOUND 1 (Russian Jet).  Your callsign is SOUND 2.

Once you check in with your lead on the ground, you will be prompted to switch your UHF radio to GROUND.  Once that happens, you lead aircraft will start its engines and taxi out about 40 seconds later.  Your lead aircraft will taxi fairly quickly to runway 14, so make sure to keep up.

Approaching the runway, you will be prompted to switch to tower frequency.  Make sure you do this prior to lead taking the runway.

As your flight lead takes position on the runway, you should do the same.  Try for a formation takeoff if you’d like, otherwise follow your lead’s takeoff roll as soon as possible.

Once airborne, maintain formation with your leader.  They will lead you to waypoint 1 (REGEN EAST), wh ere you will orbit, awaiting your flight lead to reach waypoint 2 (REGEN WEST).

One your lead is at REGEN WEST AND you are overhead waypoint 1 (REGEN EAST) the fight will commence.

Do not shoot until both aircraft arrive at the merge.  You must pass within 6000ft of each other before the fight starts.  Failure to get within 6000ft of the opponent will break the mission, so make sure you pass close.
Once you merge, you are clear to fight the opponent.  You will actually fire your AIM-9 or gun, but any fire will not damage any aircraft (it’s simulated, after all).   The script is developed by one posted by GRIMES in the Eagle Dynamics Forums: https://forums.eagle.ru/forum/english/dcs-world-topics/mission-editor-discussion-and-questions/143409-training-sams-by-grimes?p=3579442#post3579442

Once a hit is registered on any aircraft, there will be a knock it off call and both aircraft will return to their respective REGEN points, SOUND 1 to waypoint 2, SOUND 2 (player) to waypoint 1.

You will fight a total of four (4) fights and then return to base.

On approach to runway 14, you will the overhead break and land.

One last thing:  There are elements of randomization incorporated into this mission.  Be prepared to deviate from the flight plan as necessary.