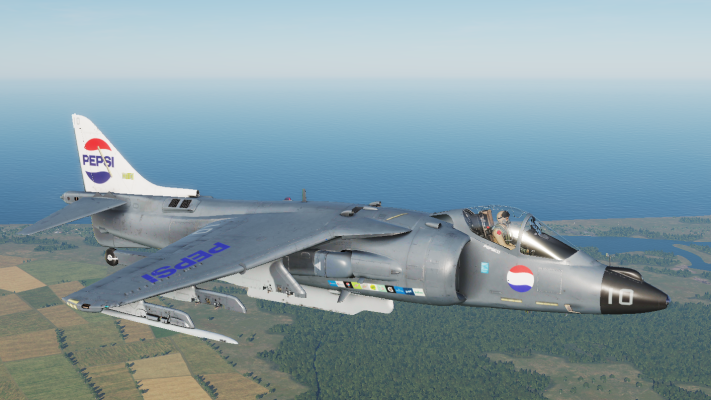 Tipo - Livrea
Autore - taoistlumberjak
The Pepsi Harrier, finally available to own.  Kind of.  Okay, it's really the best I could do short of buying a jet from that test pilot who has been buying them up, and he's definitely not going to sell one of them to the likes of me.

In the late 90's, Pepsi advertised in a commercial that actually ran on live TV that you, the Pepsi consumer, could purchase a real Harrier for a mere 7 million Pepsi Points.

Pepsi Points were earned by drinking Pepsi (or related brands).  Alternately, Pepsi Points could be purchased for 10 cents ($.10).  A quick bit of super-math indicates that this is considerably lower than what the US Government probably paid for a Harrier.  Given that the price in $24-30 million per jet, this was about $23.3-29.3 millions more than what Pepsi was offering the jet at.

Pepsi, naturally, refused to honor the deal on the grounds of "how are we going to actually have a Harrier?"

However, you the home DCS pilot can now fly the Pepsi Harrier for the cost of whatever Razbam is selling their jet for at the particular moment you buy the jet (buy the jet, it's pretty neat).  Follow the readit instructions, or skip them and install it to the "C:\Users\<YOURNAME>\Saved Games\DCS\Liveries\AV8BNA" folder.

Enjoy flying the Harrier with your new Pepsi Stuff livery.

Please don't upload this to any place where you can charge someone for downloading it.  That's jerk behavior.  Don't be a jerk.
FOLLOW US