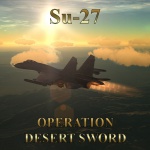 Tipo - Single mission
Autore - DarkFire
In this mission you lead a flight of 4 Su-27's on the NTTR map. Your objective is to carry out an OCA sweep to deny the area to enemy HVAA ferry flights. Beware though, the enemy HVAA targets are not alone...

In this mission you are the lead pilot in an Aggressor flight of 4 Su-27's. Your mission is to carry out an offensive fighter sweep of certain ranges within the NTTR to prevent enemy high-value air asset ferry missions. You're authorised to destroy any enemy targets you come across. Be careful though - intelligence indicates that the HVAA targets are escorted by enemy fighters...

The mission begins with a cold start at Groom Lake and then a late afternoon patrol and combat with enemy forces. If you take your time over destroying the enemy aircraft before returning to base it's entirely possible that you'll be landing in the dark.

This mission requires either the stand-alone Su-27 module or Flaming Cliffs 3, and also the NTTR map. It is therefore only usable with DCS World Open Alpha and was created using the latest version as of 15/03/2016. The mission does not use MIST or other lua scripts so it should be fairly robust against future changes brought in by game engine updates.

A very big thanks to Baltic Dragon for the AWACS voice-overs.

1. When you ask for permission to taxi your wingmen won't wait for you. They usually start to taxi in this order: 3, 4, 2 and then you the player. Although strange this won't effect the mission as you can pass them to pull ahead on the runway for takeoff. It appears that this is a DCS World bug and I can't do anything to correct the problem. Not a show stopper by any means. EDITED TO ADD: As of the most recent hot fix for DCS World 2 this problem appears to have been fixed. Your wingmen will taxi in order 3-4-2 but will now wait for you to taxi before following you.

2. In addition to a friendly AWACS you also have an EWR site. For some reason the EWR site won't respond to radio requests. This again appears to be a DCS World bug over which I have no control.

Any questions, queries or constructive criticism, please feel free to email me at Sir.Wulfrick@gmail.com
Tags: Su-27, NTTR
FOLLOW US