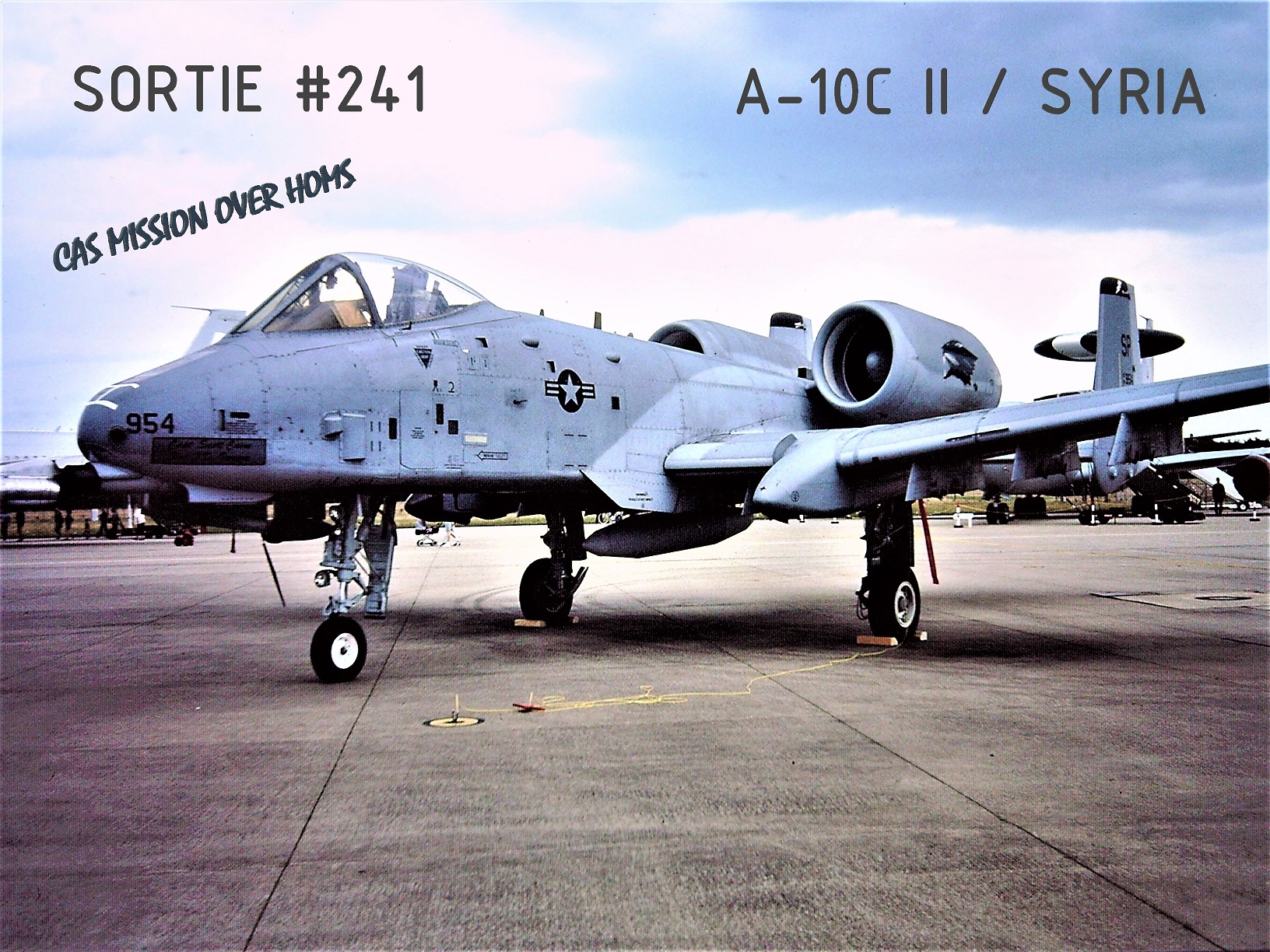 Hop in your Spangdahlem Hog (board #954) and get ready for your next sortie...
Today you'll fly CAS over the city of Homs, in aid to our allied troops. Hammer6 will provide SEAD cover and Chalice5 will be active GCI.

Just another day in paradise...


Designer notes:
No mods required
Duration ±1,5hour
Difficulty average
ATC is mainly done semi-automatic (player input is sometimes asked)
AAR is optionally
Some TGP skills will enhance the experience
Incirlik can be a bit performance heavy, but the rest of the mission is very VR friendly (I only tested in VR)
Mission specific kneeboard with freqs included

Since 2008, there have been numerous terrorist attacks on Western countries and the past year these attacks have intensified. The source of the threat is an insurgent force that's spreading their believe across the globe and are rapidly growing in numbers. This insurgent group has captured and occupied large portions of Syria and are on their way to overthrow the Syrian regime. Only a few Syrian lines of defence are still remaining. Supported by the Russians, Syria has been fighting the insurgents for many years now.

Now that the war has been brought to Western countries by terrorism, a large coalition has been formed to suppress and destroy the imminent threat.

As part of this intervention force, your squadron has been deployed at Incirlik AB for nearly 2 months now. Two weeks ago a massive allied ground offensive started pushing into Syria from Lebanon and there has been heavy fighting going on since.

It's a complicated situation with basically three parties: Syria / Russia, the Western coalition and the insurgents.
While Syria/Russia and the coalition are both fighting the same enemy, situation is still tense between the two. Neutral at best.

Syria and Russia are very protective over the last few Syrian strongholds, so there's a strict airspace limitation for us.

RESRICTED AREAS:
Do not stray into Syrian airspace


You'll spawn 2 seconds after mission start - this is intended

THE VHF-AM PRESET CHANNEL SELECTOR WHEEL IS CURRENTLY BUGGED IN THE A-10C II. USE MANUAL FREQ INSTEAD UNTIL THIS IS FIXED BY ED

Mission designer notes:
1) All ATC will be done semi-automatic, unless specifically mentioned otherwise
2) Changing player loadout won't break the mission
3) Some basic TGP skills will enhance the experience, but don't worry if you can't find all targets (you’ll get help if you need it)
4) Mission duration - about 1,5hour (depending skills and choices)
5) Mission difficulty - average
6) AAR is optionally
7) I only tested the mission in VR . For the sake of realism, using external cameras is not recommended (you’ll see stuff spawn and despawn..)
8) No mods required
9) Please give me feedback!