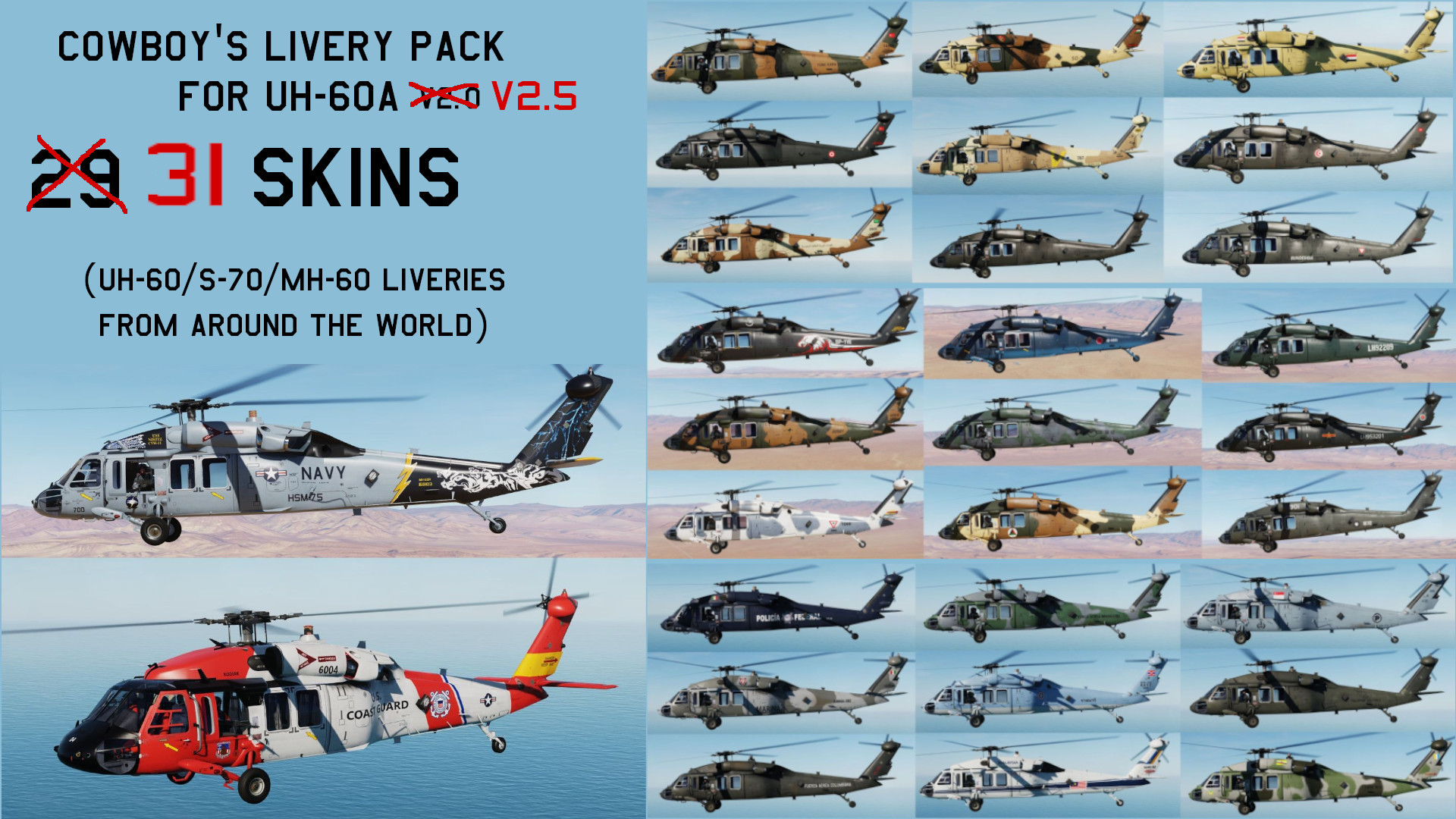 New liveries in 2.5 are: HSC-25 Island Knights (for Marianas Map) and US Homeland Security

(2) the following is OPTIONAL. Only do this if you are comfortable modifying the core DCS installation:
Custom roughmet (lighting reflectivity) textures are included. Although not required, these improve the look of the liveries. To activate them, you will need to have a generic roughmet available for the UH-60a AI model (not currently in default DCS install). If you don't already have one that you use, I have included one in the "Bazar" folder included in the zip file. To use, Copy the "Bazar" folder included in the zip file to your DCS installation location (example: "C:\Program Files\Eagle Dynamics\DCS World OpenBeta") This should place the generic texture in your Eagle Dynamics\DCS World OpenBeta\Bazar\TempTextures folder.


Notes:
-----
- With this pack I have decided to consolidate some of the textures to save space. Therefore, there are shared/common files used by most of the skins. These files are in the "CLP common" folder - DO NOT REMOVE THIS FOLDER if you are using any of the skins in this livery pack.

- As of now, DCS either does NOT include some countries or does NOT recognize that those countries have UH-60a variants; therefore to load the following skins, you will need to use the Combined Joint Task Force's (as country) to load the livery. This includes: Afghanistan, People's Republic of China, Taiwan, Poland, Columbia, Philippines, Brunei, Singapore, Tunisia, and Sweden. Nevertheless, I have built in the ISO-3 country code for all the liveries, so if DCS updates the aforementioned country info for the UH-60a (or you have modded the info), the skins are already designed to work correctly without the need for using Combined Joint Task Force.

- Although I based all of these skins on photos of actual aircraft, they are not necessarily 100% accurate. They are artistic representations of subject matter of my choice. Many of these liveries are actually from aircraft variants that are NOT the UH-60a model, therefore some things are wrong. Furthermore, some of the graphics are not in the right place (because the DCS model duplicates and mirrors parts of the texture which causes some things to get flipped backwards). However, this is the closest I could make it, given the DCS UH-60a AI model and how much time I was willing to put into it