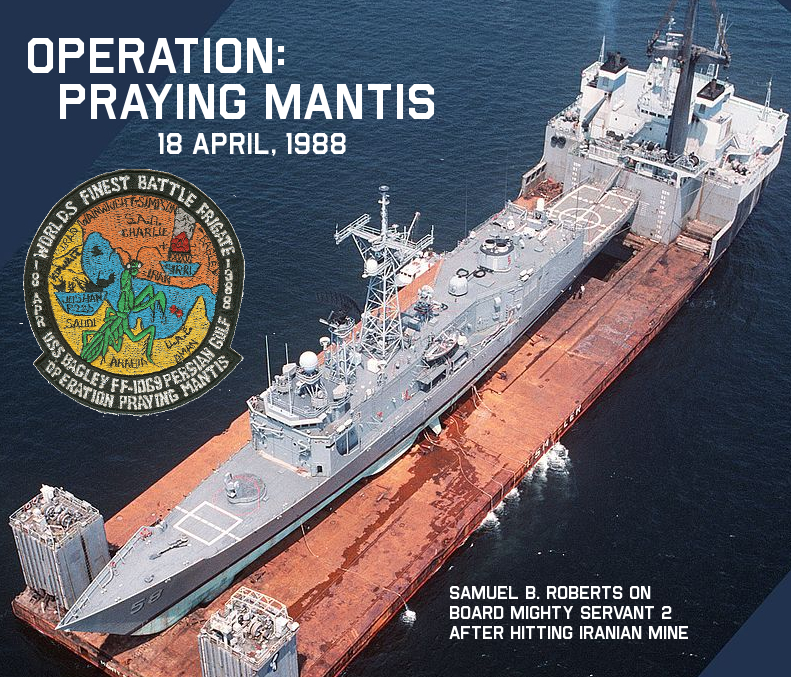 On 14 April, 1988 the guided missile frigate USS Samuel B. Roberts struck a mine while deployed in the Persian Gulf as part of Operation Earnest Will, the convoy missions in which U.S. warships have been escorting reflagged Kuwaiti oil tankers to protect them from Iranian attacks. The explosion blew a 4.5 m (15-foot) hole in the Samuel B. Roberts's hull and nearly sank it. The crew saved their ship with no loss of life, and the Samuel B. Roberts was towed to Dubai on 16 April. After the mining, U.S. Navy divers recovered other mines in the area. The serial numbers have been found to match those of mines seized last September, U.S. military officials have planned a retaliatory operation against Iranian targets in the Persian Gulf.

You are the first part of that retaliation.  Your mission is to neutralize Iranian Air Force fast response abilities in the area.

(Designer's Note: While Operation Praying Mantis and the events that led up to it did occur, this mission does not reflect the actual targets or participants)

You're cold and dark on the deck of the USS Stennis at dawn (LAlt+L for flashlight!).  Startup, takeoff, then refuel at KC-130 heading north over Stennis Task Group.  Hit the parking area of Sirri Island Air Base, and destroy as many of the Iranian aircraft as you can.   If you come off the target due east, the morning sun should help screen you from any infra-red attack.  Load out is 8 Mk82s, 2 AIM-54, 2 AIM-7 and 2 AIM-9.

Waypoint 1 is 22nm north-west of Sirri Island, and should give you a good line-up for your IP and ST points.  Your Free Point is over Abu Musa Island and should put you in the vicinity of Shell (the S3 tanker)

Waypoint 2 is the on the Iranian coast north-west of Qeshm Island airbase.  The Iranian AWACS that is your secondary target is orbiting in this area.

A USMC RF-4B made passes yesterday evening and got you some target photos of the Sirri Island airbase. We have had no indication of any changes (plus or minus) in the number or location of the targets.

The Iranian Air Force only arrived yesterday afternoon, so it is hoped that no significant air defenses have yet been placed, but be on the lookout for MANPADs.

After hitting Sirri Island, rendezvous with an S3 tanker 25nm east of Sirri to top off if needed.  After that, if you can, seek out and destroy the Iranian AWACS operating over Iran due north of Qeshm Island.

If you go after the AWACS, be prepared for an Iranian response - and remember; they have F-14's with Phoenix missiles and they've been in air combat for years with Iraq, so some of those guys are multiple aces.  You'll have a pair of F-15's on ready alert and a pair of squadmate F-14's from VF-84 (Cougar and Merlin, and Maverick and Goose) on HAVCAP to head off any Iranian response toward the tankers or E-2 Hawkeye. There is also a squadron of F-5's based at Bandar Lengeh, so we'll have a pair of Tomcats from VF-111 on BARCAP.  Either egress or engage the enemy at your discretion.  RTB to Stennis after mission complete.