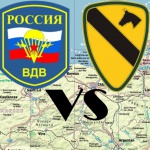 类型 - 单机任务
上传者 - markuswohlgenannt
Red and blue forces are battling over control of Normandy. The current front line extends roughly north to south, going through the town of Bayeux. Both sides rely heavily on helicopter forces, and to a more limited degree, on airpower. The air battle is largely fought by F-5E and Mig-21bis, with each side seeking air superiority.

THIS MISSION CAN BE PLAYED IN SP AND MP.

UH-1H flights on blue side and Mi-8MT flights on red side:
You are tasked with CSAR [use F10 menu to see CSAR list]. Rescue a pilot by flying to its location (an infantry soldier is used as a stand-in) and land within 100 m. If pilot ejected over water, you won't see the stand-in (he is on the sea floor), use smoke marker (F10 menu) instead. If landing is not possible, e.g. in a heavily wooded area or over water, hover over downed pilot for 10s at 25 - 35 m AGL. Return the rescued pilots to an active MASH. You may also be called upon to rescue sailors from vessels in distress.
Flights originating at Sainte-Croix-sur-mer (blue) or Le Molay (red) are also tasked with air assault. Load soldiers using the F10 menu. The objective is to capture enemy bases. This is done by eliminating all enemy forces from the base, and landing our troops there (use F10 to offload troops). You can request a heavily armed escort helicopter (F-10 menu) to assist you in this task, also your wingman is configured as a gunship.
There are active and inactive MASHs in the mission. Drop rescued pilots/sailors at an active MASH. Flights originating from FARP London (blue) or FARP Otkrytka (red) can turn inactive MASHs into active ones by supplying them by sling load.
SA342M flights on blue side and Ka-50 flights on red side:
You are tasked with eliminating red armor at WP 1. After WP1 is clear of all enemy units, proceed to eliminate enemy units at WP 2. Use your wingman to assist you (blue side only).
F-5E-3 flights on blue side and Mig-21bis flights on red side:
Provide air cover for the CAS flights, and eliminate all enemy fighters in the area. AWACS Overlord is on 251 MHz AM (blue) or AWACS 999 is on 129.5 MHz AM (red). Expected red aircraft are Mig-21bis and Su-25s and F-5E-3s and A-10As for blue side.
标签: Normandy, mi-8, uh-1, Ka-50, Gazelle, CSAR, air assault, sling load
关注我们